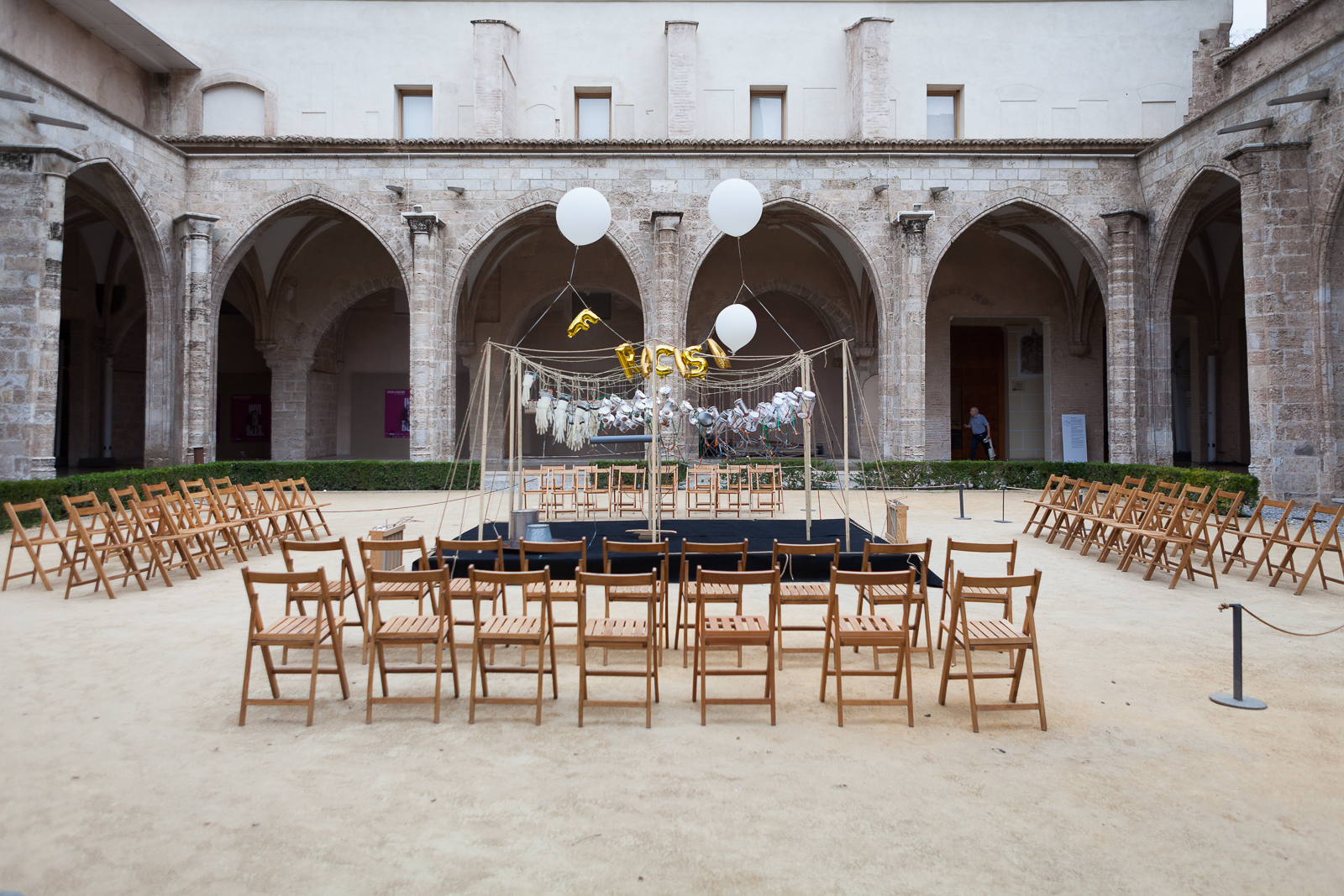 He began to work in “resistance” in the 70s hyperrealism, punk, LSD, comics, UFOs, multidisciplinarity, independence, and a clear vocation of “spirit of contradiction” were his school of spiritual formation. Think about how to start talking about something that speaks for itself and the abyss of art and its function emerges. Again and again, the […]

He began to work in “resistance” in the 70s hyperrealism, punk, LSD, comics, UFOs, multidisciplinarity, independence, and a clear vocation of “spirit of contradiction” were his school of spiritual formation.
Think about how to start talking about something that speaks for itself and the abyss of art and its function emerges. Again and again, the works seek to recall that which is empty. A social, emotional, vital void. This emptiness is the meeting place that no longer exists, that has been taken away. And here art comes to our aid; it emerges as a response to what has been annihilated and provides us with a narrative by giving meaning to that emptiness. It helps us to live a reality that is often terribly unbearable and we understand that which surrounds us and which we were unable to distinguish. Suddenly everything makes sense.
Rafael Tormo’s work generates a whole context of thought relations around itself from the tragic emotion, from the desacralised popular tradition and from the intellectualised collective.
Art is useful when it is born of necessity, when it becomes a transmissible fact. These works do not need a script. They are the script. They arise from their context, from their social relationship, from their dialogue with the physical, the imaginary, the social. These works and the relations they generate return to the plane of the real after passing through the symbolic. They return to materialise in words as a conversation.
It is in the 1980s that they begin to have a direct relationship with the professional art world, at the same time as they begin to rethink themselves within the sectorial and cultural framework of the context. Appropriations of galleries at ARCO (1983), broadcast live on “La Barraca”, Radio 3. Constant participation in meetings for reflection on the margins of art and its contexts. He has taken an active part in workshops and conferences based on criticism of the institution and experimentation with participatory processes. He has coordinated projects such as ‘Ànimes de cànter’ (1996-09. Nomadic collective of cultural criticism). From 1999 to 2009 she coordinated and curated ‘BANUSAIDI’. She has participated in the press and specialised magazines. She coordinates PERIFÈRIES, meetings for reflection and action.
Also educational experimentation and curatorial projects with various collectives: la Balsa 13. She is a member of the Gloria & Robert collective with contemporary dance projects. Co-directs the “Festival d’acció poètica en Terres de l’Ebre: BOUESIA”. Member of ‘Això és com tot’; editorial project on cultural research. She also develops the editorial project, Sindrome Kessler. He directs AVAN Rural spaces for contemporary research. He is coordinator of the HABITARE Centre. He is currently general coordinator of the Asociació de artistas de València, Alacant i Castelló AVVAC and founding member of the Mesa de las Artes Visuales de la Comunitat Valenciana. His artistic work is conceived as mediations in common paradoxical spaces that make states of crisis possible. In the words of the artist himself “I try not to approach art only as a residual liberating space to be able to leave and enter the spectacle”, he comments that his intention is to get closer to what is still life from the local.
Web
Read more Read less