There isn’t much else to add, as anyone conversant with the way Xisco Mensua approaches his work as an artist already knows. There isn’t a whole lot to explain. And for anyone seeing it for the first time, what is there to say? In The Gleaners and I Agnès Varda made the following statement: This […]

There isn’t much else to add, as anyone conversant with the way Xisco Mensua approaches his work as an artist already knows. There isn’t a whole lot to explain. And for anyone seeing it for the first time, what is there to say?

In The Gleaners and I Agnès Varda made the following statement: This is my project: to film with one hand my other hand. Cloaked in Varda’s signature naïf posture, this claim coincides with the moment when the hand being filmed obscures our view of a postcard of a Rembrandt self-portrait. Varda addresses the power of the image or the power of the filmmaker’s decision; but, more importantly, she defines her practice as an exercise contained in the gap between both hands, and she revolutionizes language if we accept that this bounded space can contain the narrative and, with it, the possibility of the film taking shape.

I pore over Diarios, the vertical filming that Xisco Mensua has put together from brief capsules of video filmed mostly in his studio in Rocafort and his home in Montcada. Days, nights, interiors and exteriors. Bibliographic references, film clips, songs and his own drawings that recall all of the foregoing. Life unfolds in a kind of waiting, in the apparent comfort of an everyday setting which, nevertheless, discloses a certain urgency to leave nothing out. The artist’s presence can be discerned in the shots through his breathing, his (often trembling) left hand, light reflected in the window or TV screen. On occasion he appears himself, in the darkness, like a shadow, like the silhouette in the painting called Escribir el alma (Write the Soul). A body covered with quotations on madness, dreams, death, suicide, the soul and illness. These compositions on vulnerability that is somehow condensed in the title of this exhibition: Love is Sad.

Around the mid-point of Diarios is a fragment of Rainer Werner Fassbinder’s Lola. The credits appear and the camera begins a panning shot. It halts briefly on a blackboard on which a rose is drawn with chalk, and continues its pan in search of closer objects. Then a table appears on which we see a marker and a sketchpad with a book on top of it. The angle opens up and focuses on what is nearest, a plate of strawberries and a fork. Suddenly, a hand appears, the one that is not filming, picks up the fork and zeroes in on a strawberry. This is the point where the dialogue in the film begins and the camera turns quickly, closing the angle on the screen: Why do you only read me sad poems? Poems are always sad. I don’t believe it. Can they not be happy for once? A poem comes from the soul. And the soul is sad. It’s true, it’s true. Why is this? Because the soul knows more than the mind. That’s why it is sad. With this simple action, Mensua, like Varda, defines the keys to a work that draws from an outside that is encrusted in life. It doesn’t matter that the action takes place in the studio, at a desk or on the kitchen table. The references come to light and are expressed in the form posited here, for the simple reason that there are no clear dividing lines between what belongs to one moment or another. I recall Varda speaking about how, during the long period of raising her children, she decided to buy a long extension cord and film in her local neighbourhood in Paris, filming exclusively at home and wherever the extension would reach. Returning to Diarios, Xisco reads a book and films his hand holding it. The camera records page 80 of an edition I’m not familiar with of Lejos de mí. Estudio sobre la identidad (Far From Me: A Study on Identity) by Clément Rosset. In it the French philosopher defines introspection as a contradiction in terms: a ‘self’ cannot take itself as an object of study, in the same way that a telescopic lens cannot take itself as an object of observation.

Seldom have I heard Xisco Mensua speak in his own words. In any conversation in which he is involved quotations make a constant appearance.

Good proof can be seen in the fact that Love is Sad is the only thing he has allowed himself to say on this occasion, a statement that nonetheless could come from a script by Fassbinder or from any of the fragments inserted in this exhibition. I search in a notebook for a sentence by Jean Baudrillard in which he claims that words are bearers and generators of ideas, more so than the contrary. Then I come across a fragment of a conversation a few years ago between Nacho París and Xisco Mensua. In it, París sustains that the latter conceives the word as something visible, like an image on a plane, as if the word or the image were the fruit of the same intellectual operation and produce identical objects, creating a work that appears to be completely tangled in the nets of language but that expresses the impossibility of reducing the image to a word and the word to an image, impermeable to the jurisdiction of language, to description or verbal interpretation, and that is it more a question of presence than representation […]. Perhaps this goes some way to explaining that the main wall of his studio, the one on which painters usually paint, is here, possibly for a question of priorities, covered by a select collection of books, greater even that the one he has at home.

As an exhibition, Love is Sad takes on various forms, which to some degree announces changes in the way that Xisco Mensua understands the relationship he has forged between quotation and painting. Here and now he has reached a turning point that takes shape in filmed diaries or in ceramics, but also opens a door to painting that is materialized on the canvas that shares its title with the exhibition itself. In one way, Love is Sad is the only thing here that we could classify as painting per se. It is a portrait of a self-engrossed young girl (his niece), practicing on a guitar with sheet music she is looking at on a digital device. A device that is a doorway, a portal to others, a portrait of learning, of the excitement of being able to extract from this instrument a series of notes that together form a melody. I don’t know who it is that said that birds don’t sing because they know how to sing, but because they have a song, but now it all makes sense when reading Xisco Mensua’s response to Nacho París in the above conversation: My stance is that of the student, for whom there is nothing final, and that you have to beware of the temptation of turning something than works into a recourse. 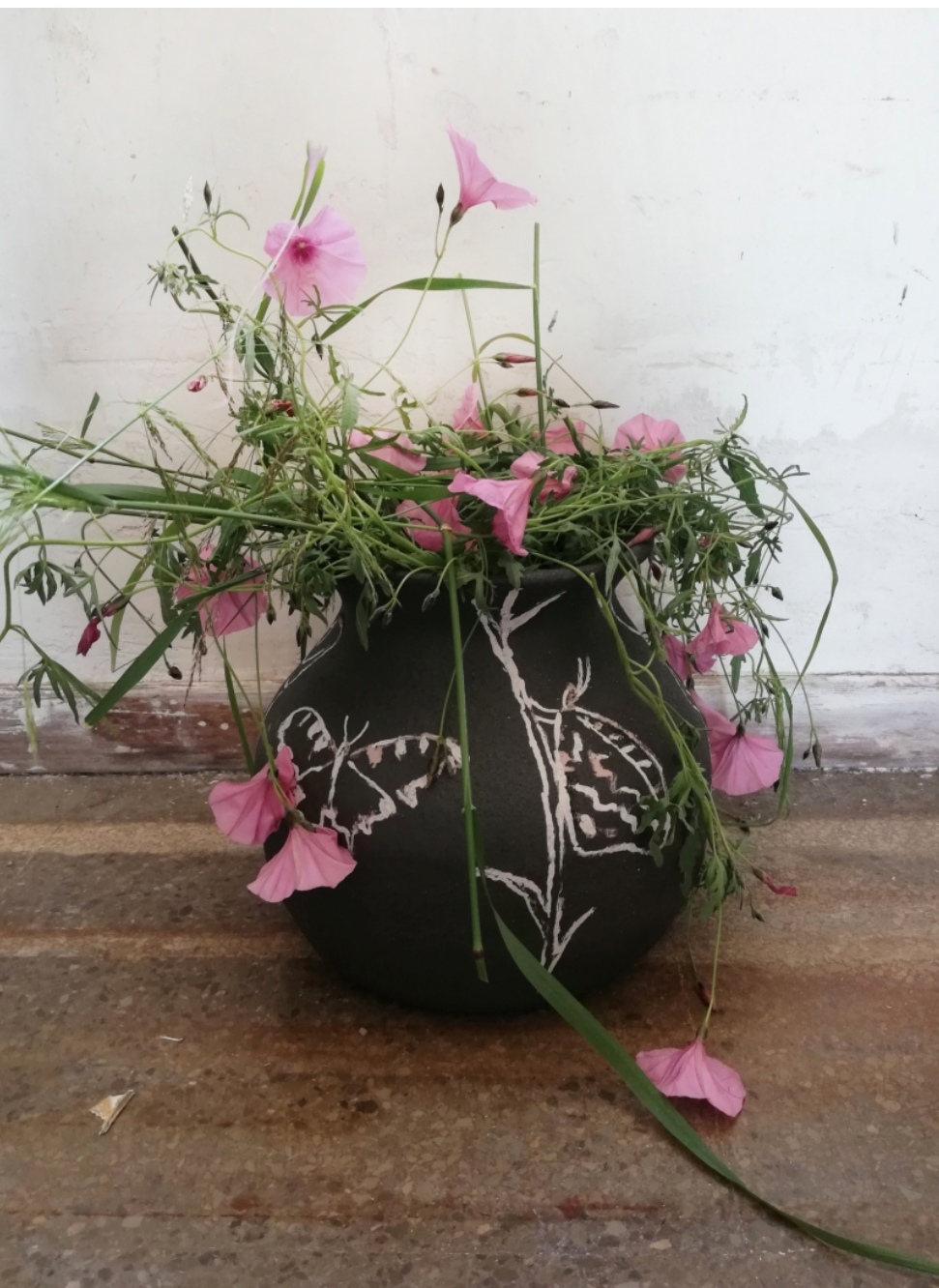 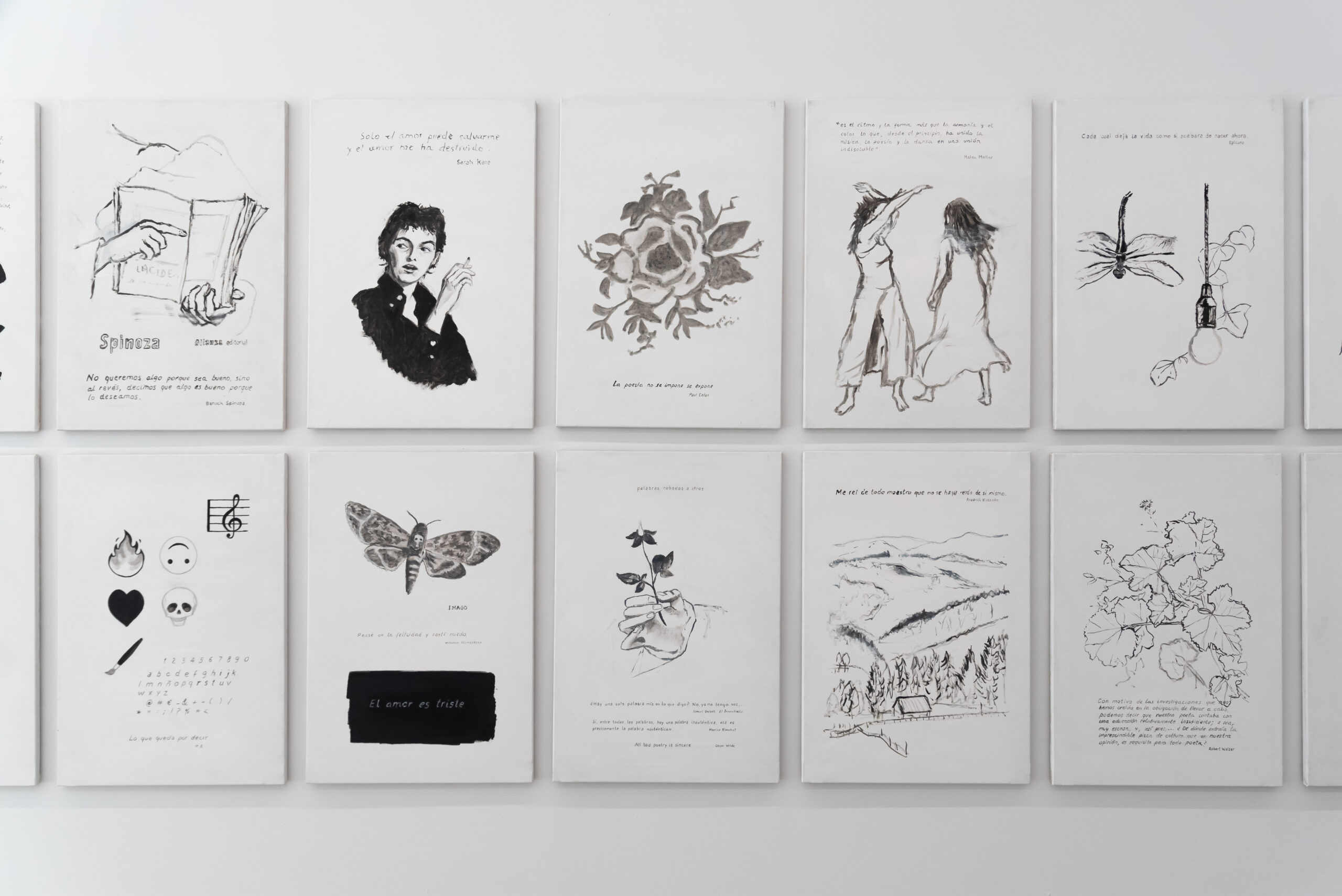 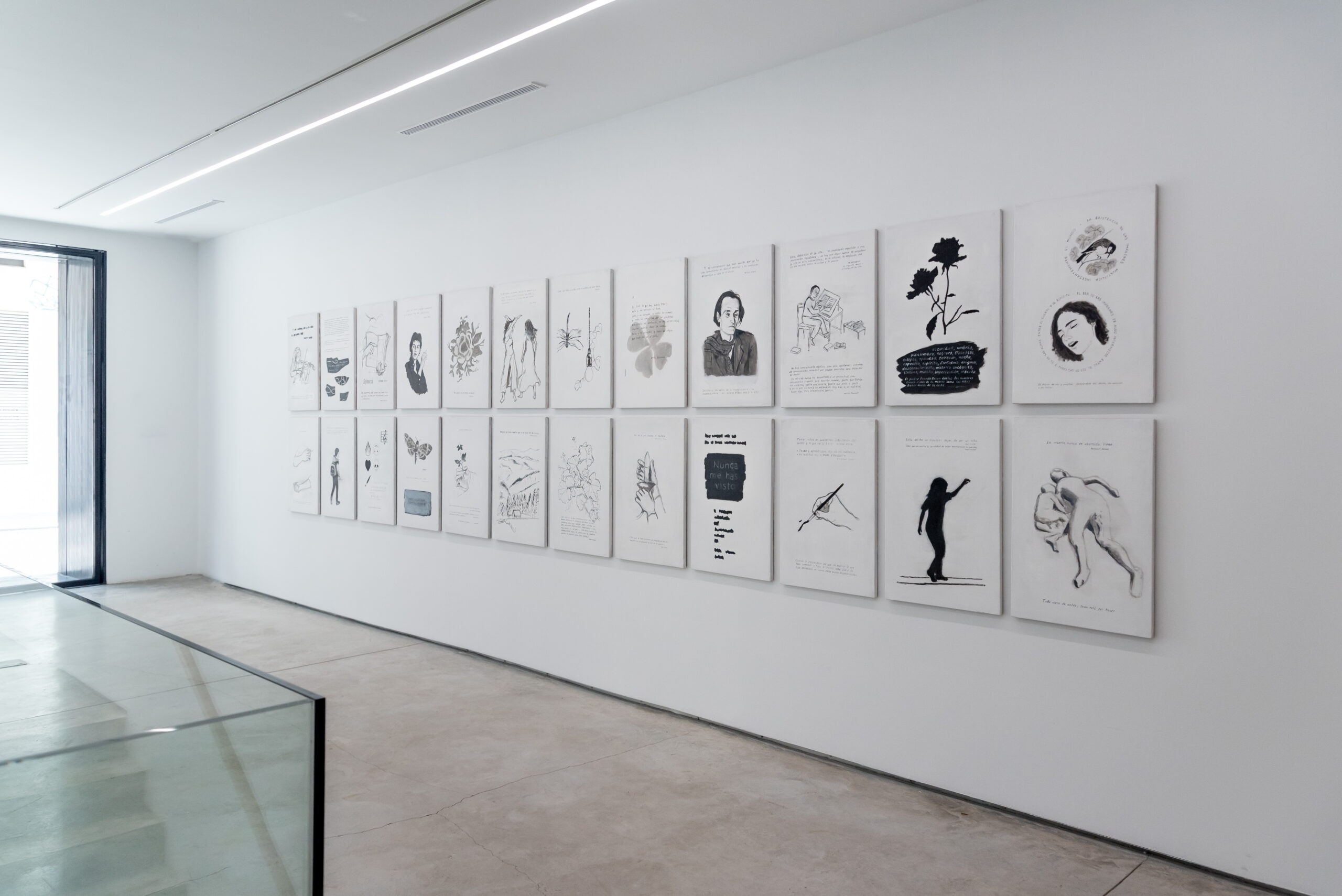 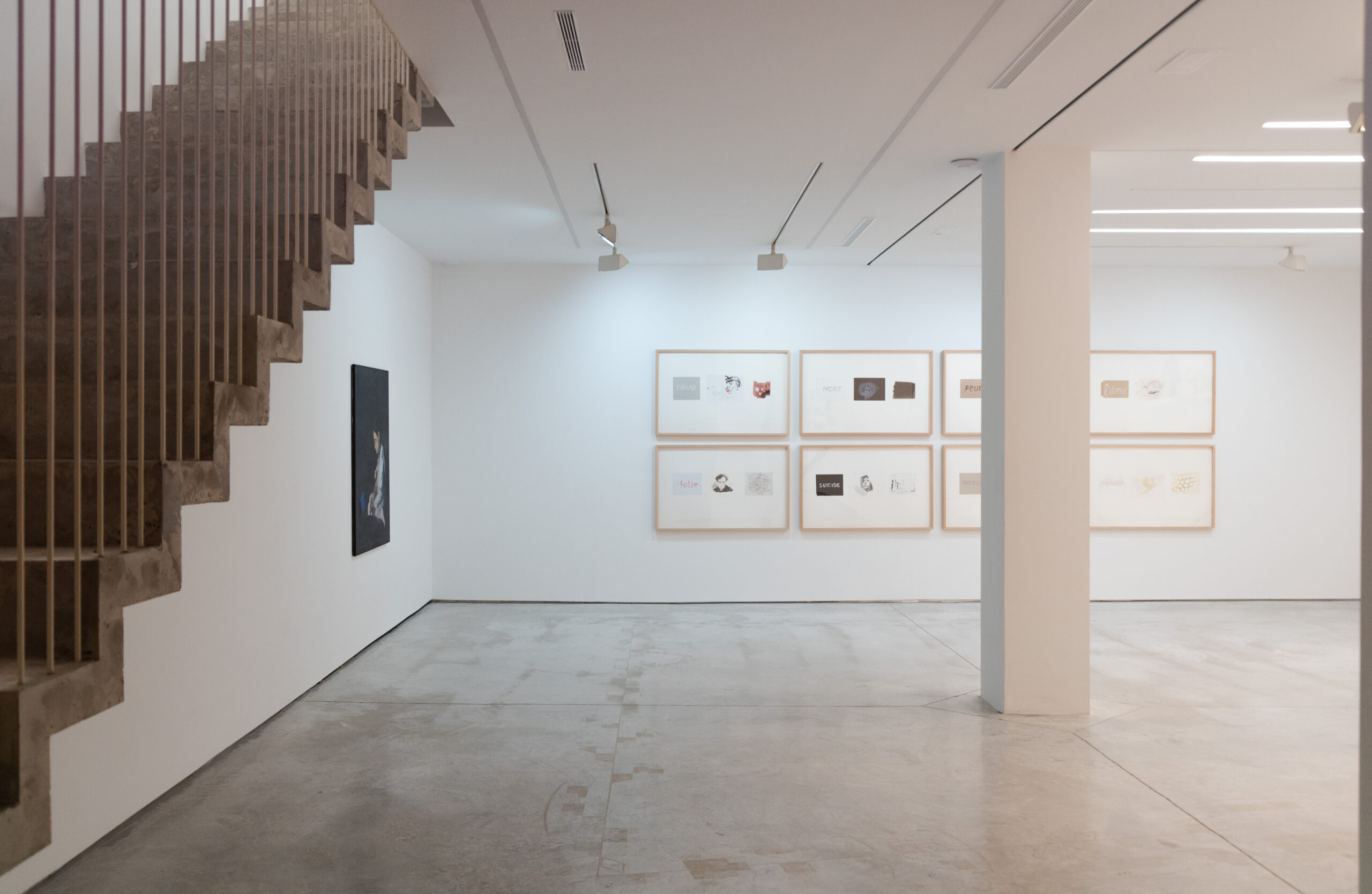 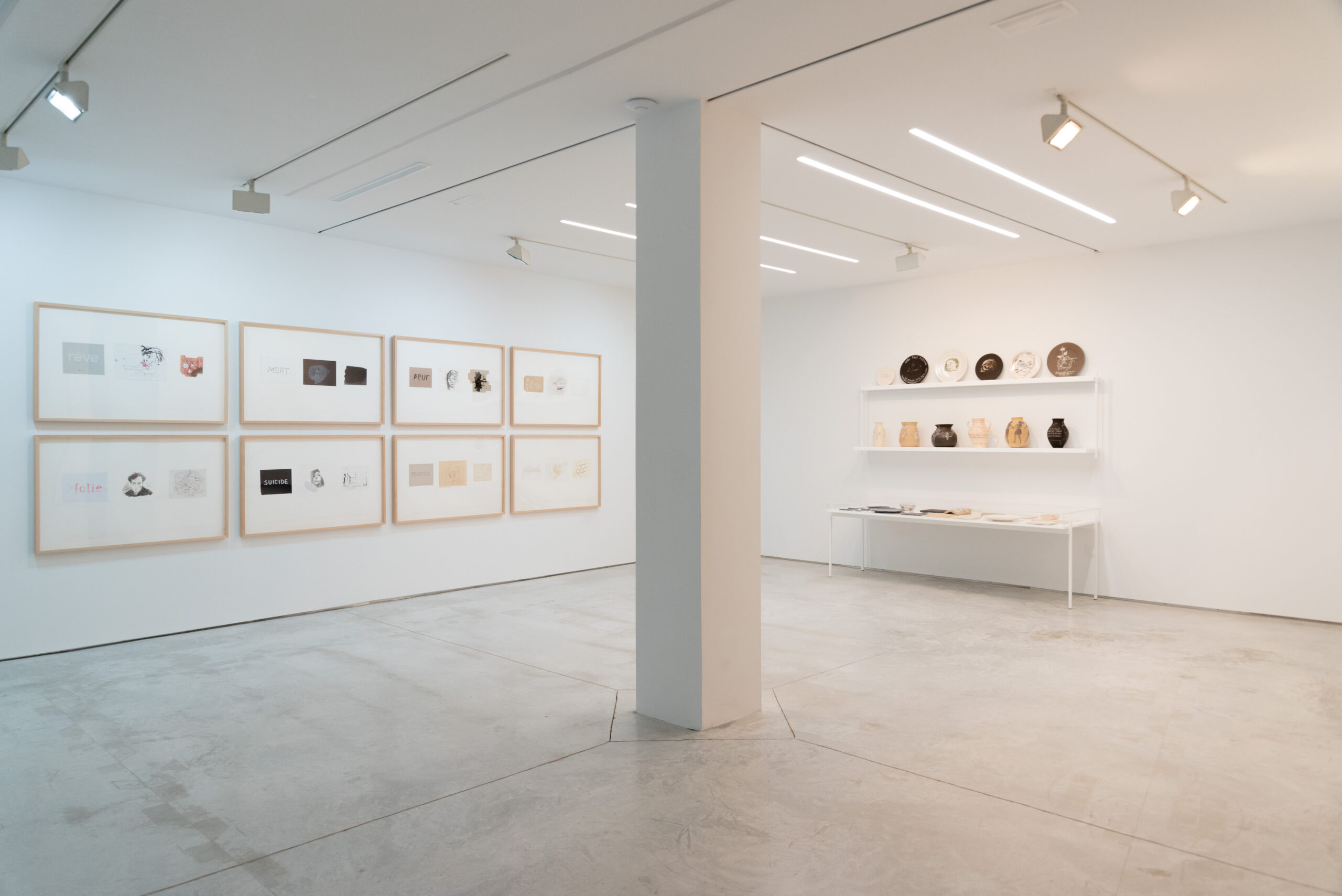 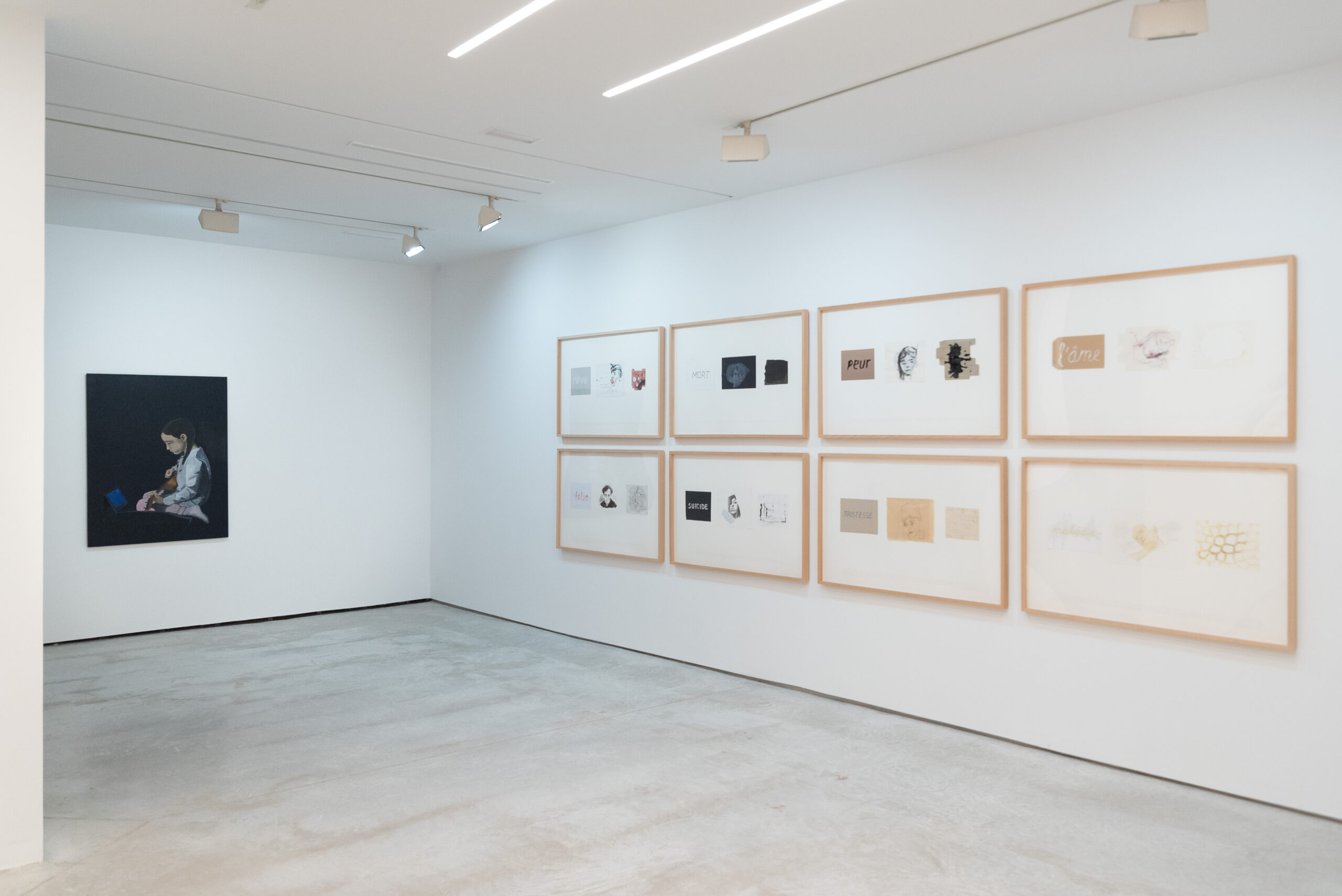 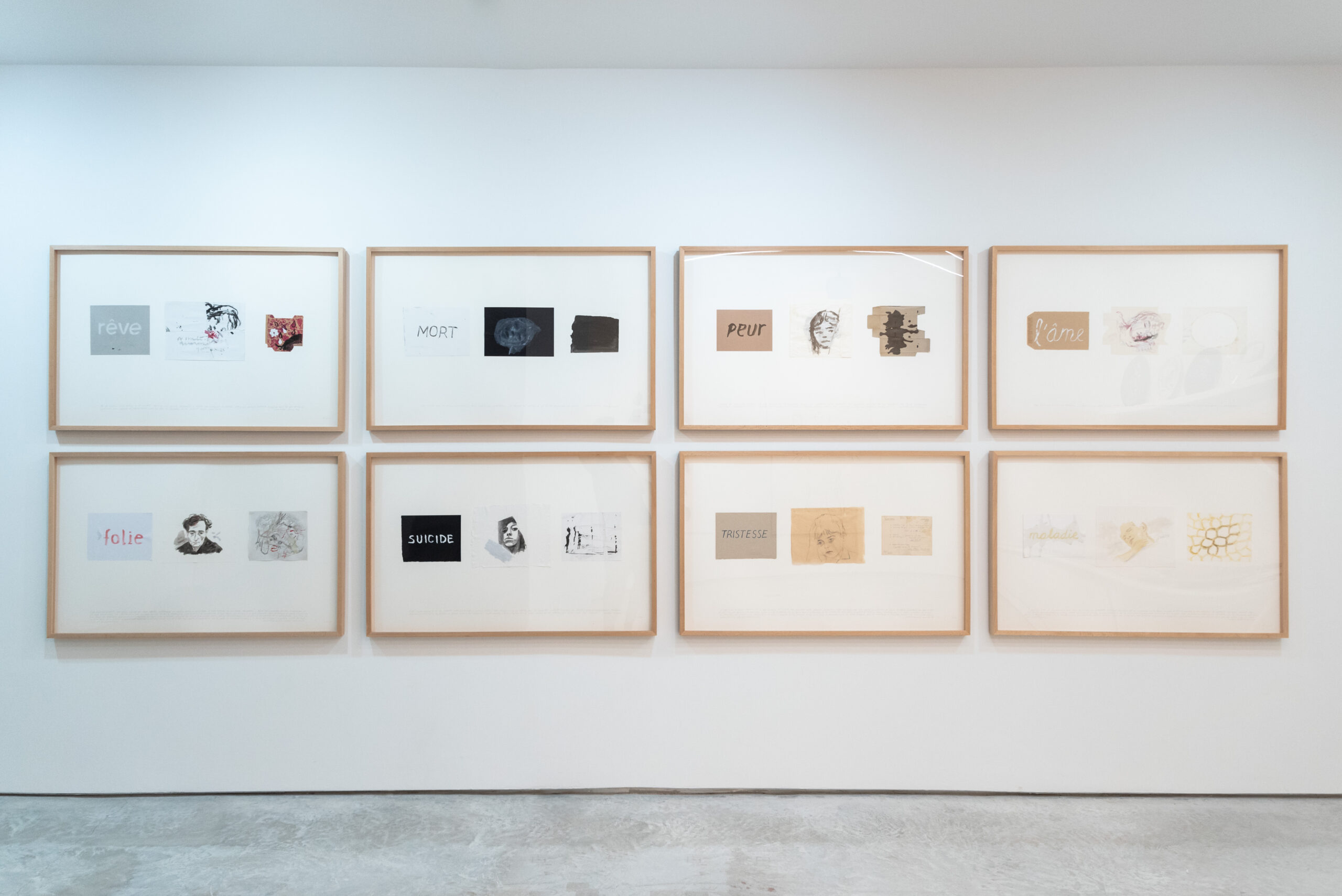 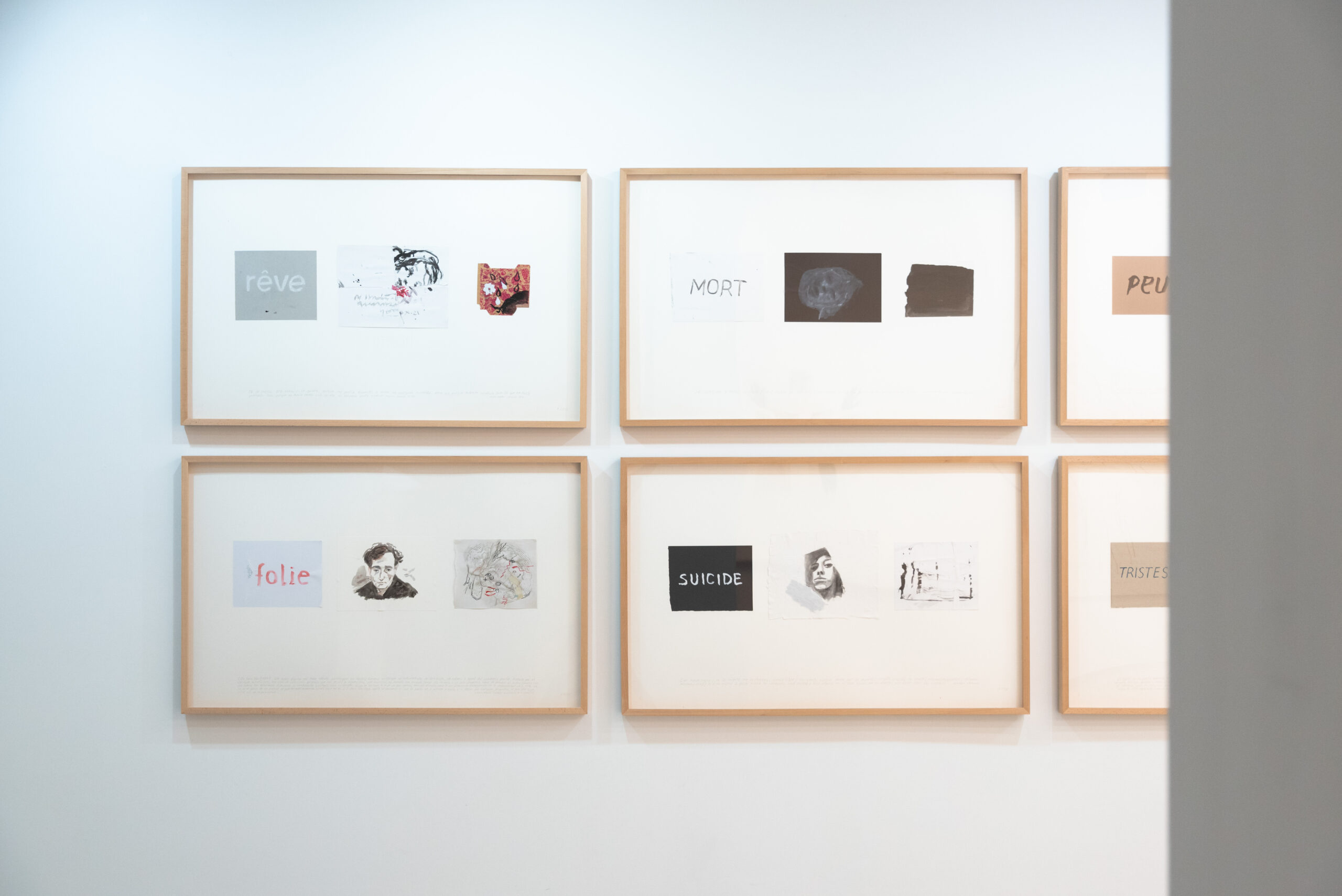 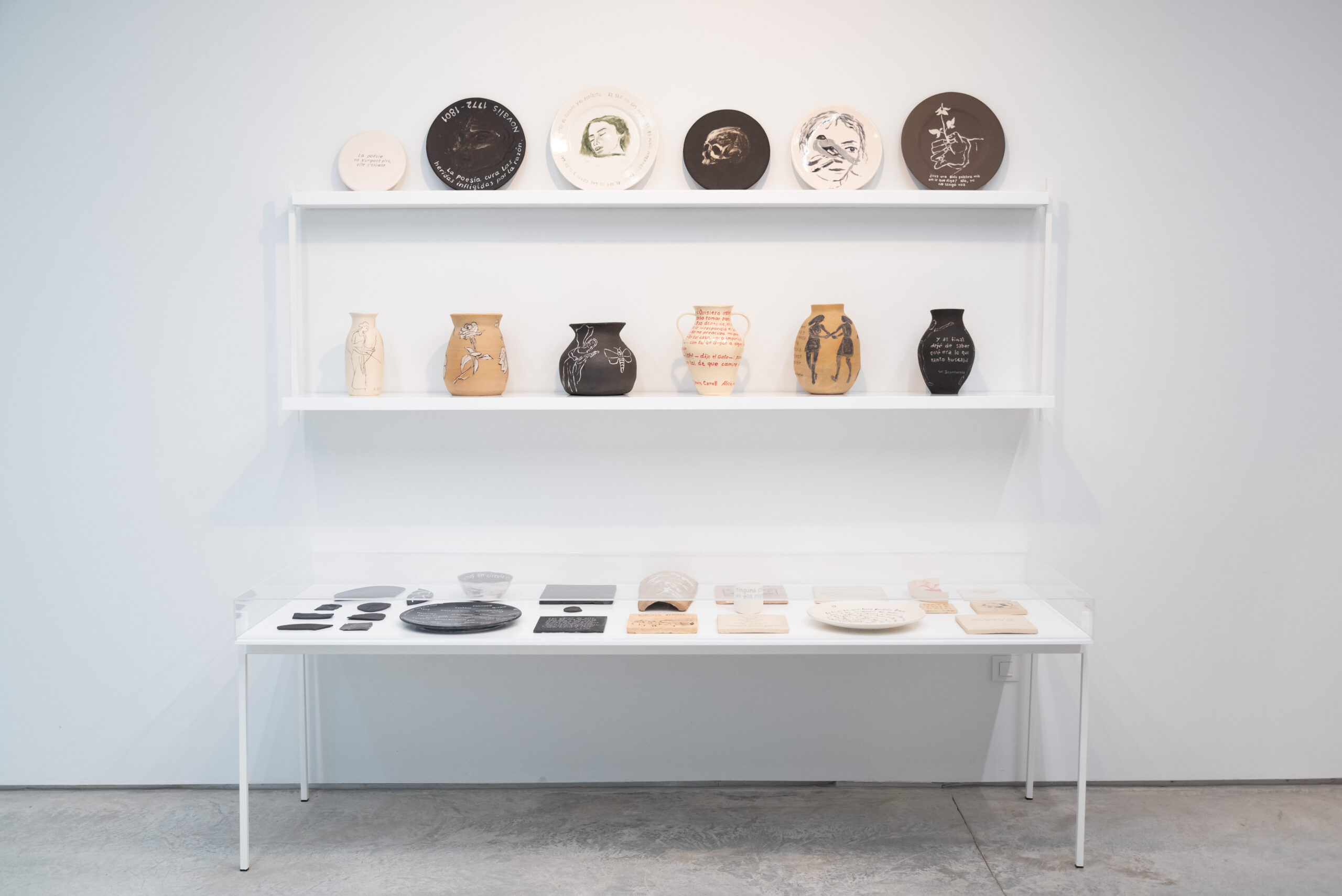 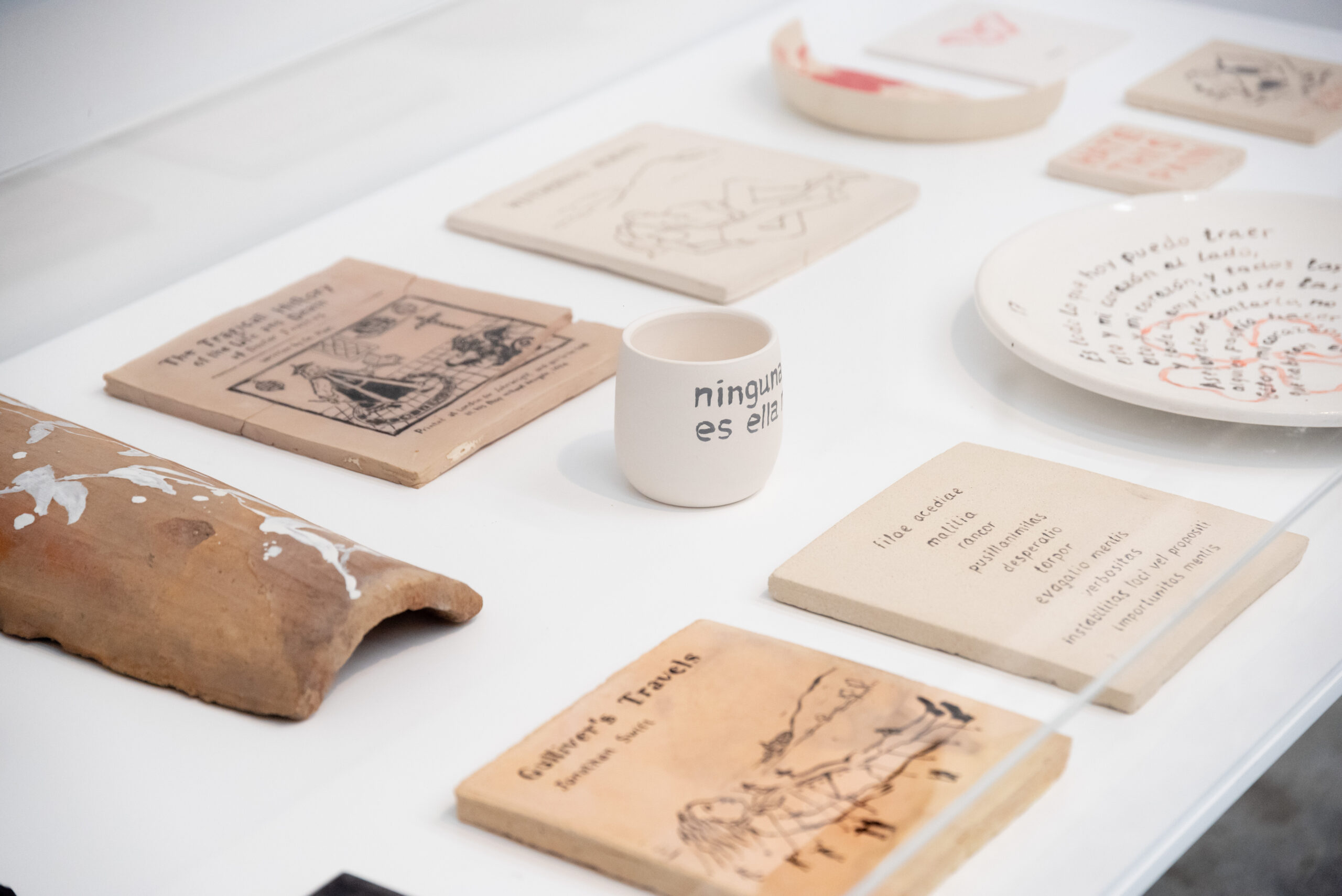 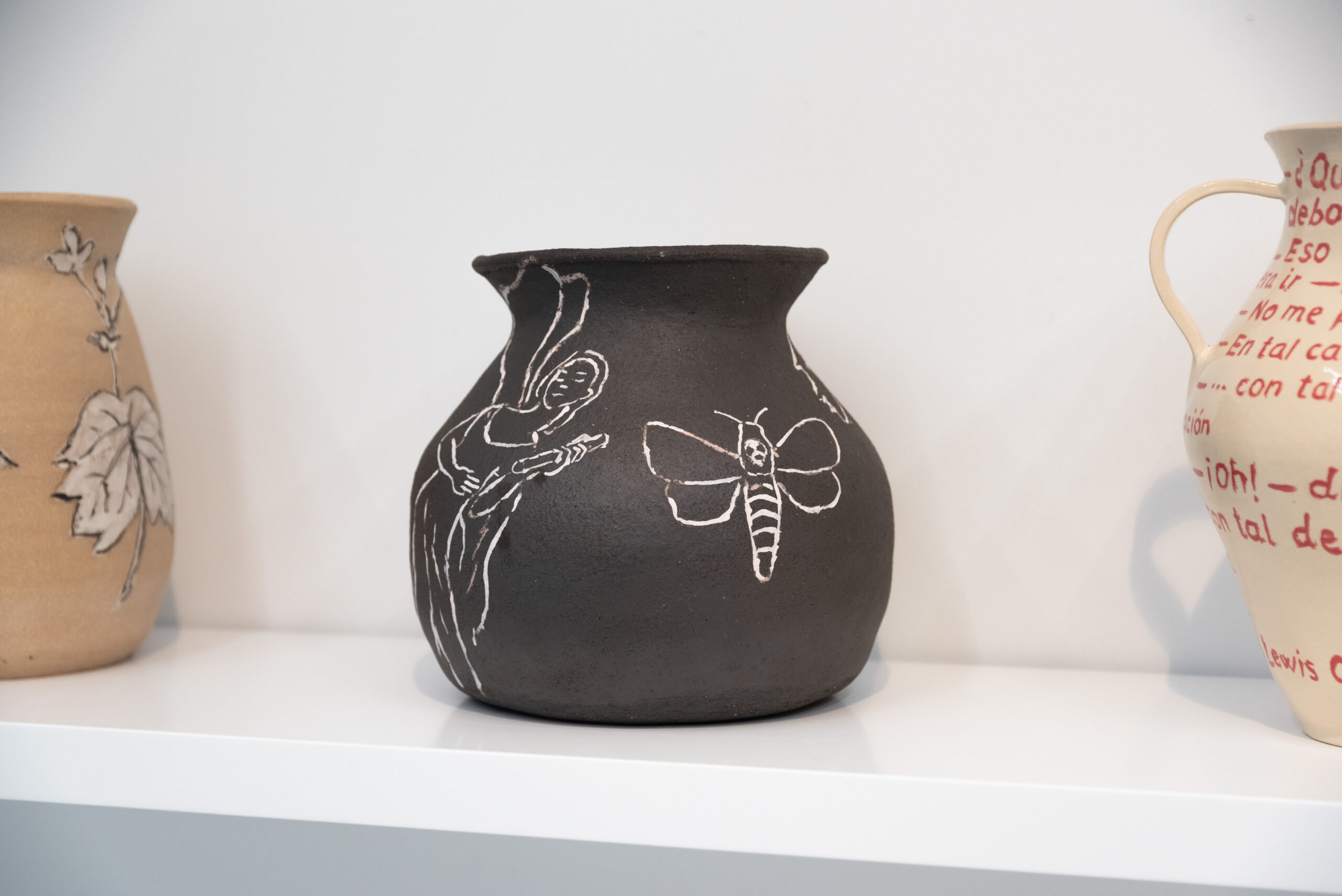 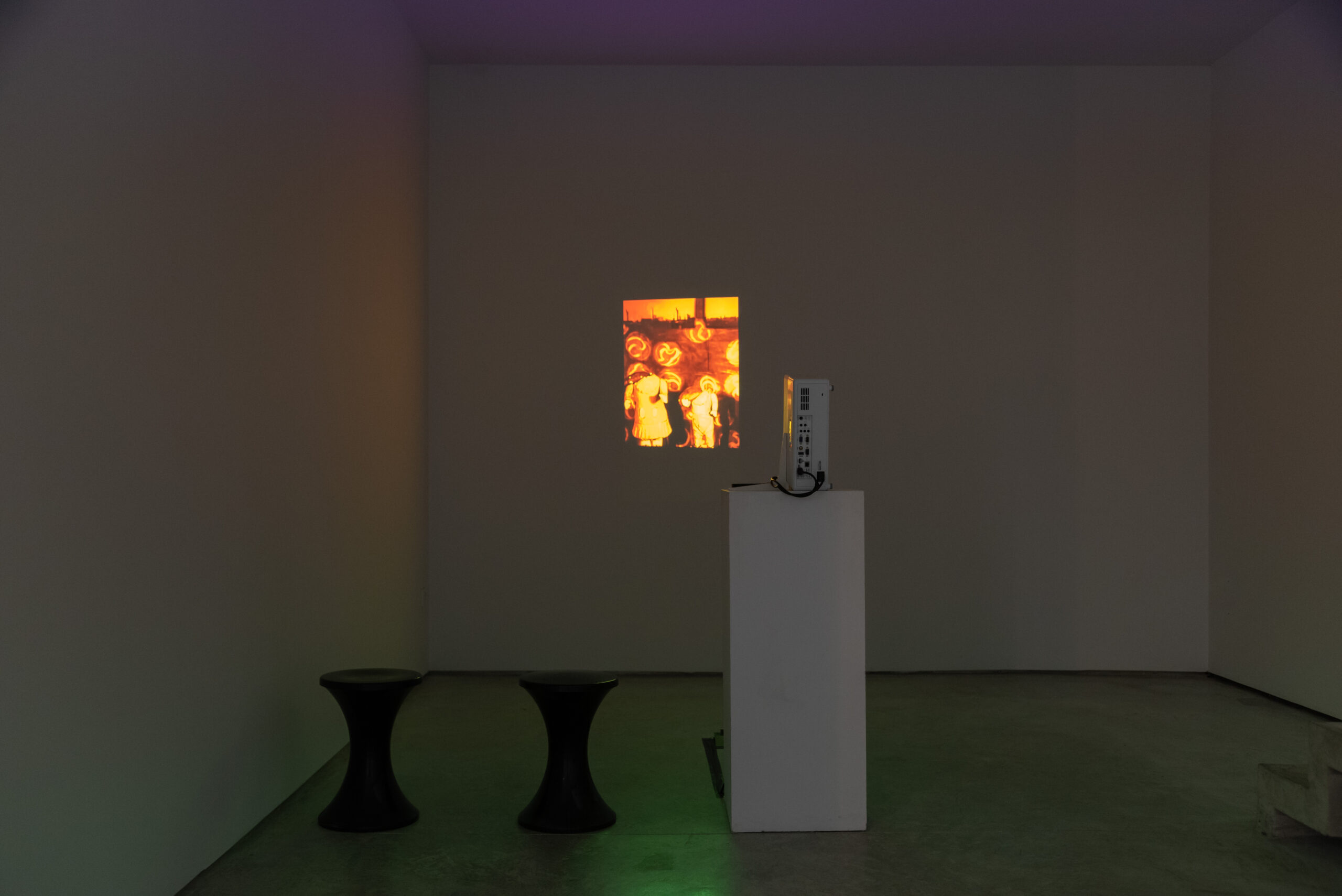