Pain partout… Bread everywhere… as food and as metaphor, as image and as idea, adjectivized or orphaned. These are some of the terms that concentrate Greta Alfaro’s work in Fornacalia, a project comprising a number of works made in various mediums in which the oven—the place of transformation of matter—is the turning point between dough […]

Bread everywhere… as food and as metaphor, as image and as idea, adjectivized or orphaned. These are some of the terms that concentrate Greta Alfaro’s work in Fornacalia, a project comprising a number of works made in various mediums in which the oven—the place of transformation of matter—is the turning point between dough and baked bread, between the formless and the resignified object, whether through displacement, declination or insistence. The title of the project refers to the festival celebrated in mid-February in honour of Fornax, the goddess of ovens and grain-drying kilns. The festival and its offerings have a twofold purpose: firstly, to pray for a bountiful harvest once fields have been sown; and secondly, and a result of the forgoing, to worship the fertility of the Earth. Therein lie the concerns Fornacalia engages with: offering, fertility, transubstantiation; although not limited to just these, because while the artist recovers the vernacular tradition of the action of kneading the ingredients for bread and equating it with the fertility rites aimed at the land and at women, also underlying her proposal is the acceptance (and effect) of cultural legacy in the transformation of the very process of making bread, a job originally associated with women.

As such, without ignoring the religious dimension of bread as spiritual nourishment that underlies her work, we can also engage with the material and industrial production of bread; to this end it would be worth taking a look at the entry for Boulanger in the Encyclopédie ou Dictionnaire raisonné des sciences, des arts et des métiers (1751-1765), published by Denis Diderot and Jean le Rond d´Alembert, as well as the illustration accompanying the definition in another volume. It narrates the absence which Alfaro wishes to evince in Fornacalia (2021), the video and installation which lends its name to this project as a whole: “When the ancients learned to knead bread, they prepared it like other foods: at home and at the time of eating. It was one of the main tasks of mothers of families. And at the time when a prince himself killed the lamb he was going to eat, the highest women did no disdain to put their hands in the dough.” In the illustration for Boulanger in the Encyclopédie however all the bakers are men: the one who kneads the dough, the one who weighs it, the two who shape it and the one who places it in the oven. In such a way that, and now excessively synthetized, Alfaro reminds us how the mechanization of the process of kneading and cooking the original mix of flour and water, to which salt and yeast would be later added (or not, depending on religious or cultural customs and rules), led to the gradual disappearance of the hands (workforce and body) of women from the process. The wall of bread the artist constructs is built as a space of resistance, because here bread is not (only) spiritual nourishment but also the construction material for a symbolic limes, the line that draws the lost territory in the map. “Sapiens mulier ædificat domum” is the inscription accompanying the first print and the first octet of the book Emblemes, ou Devises chrestiennes, composees par damoiselle Georgette de Montenay (1571), with engravings by Pierre Woeiriot. The wise woman in question to whom the book is dedicated is Jeanne d´Albret, Queen of Navarre (1555 – 1572) and champion of Calvinism in her realms. In the illustration she is depicted as an architect building the perimeter of “the holy temple, so that with all its strength / it will house virtue and keep out all vice” with the use of perfect rectangular pieces, like those used to build the wall of bread that demarcates the metaphorical space conceived by Alfaro: oven, cave, uterus, chapel, temple, palace.

An observation of the photographic collages allows one to discern how the artist uses and connects the material, allegorical and spiritual dimensions of bread. In them there is a predominance of Christian imaginary through the reproduction of religious paintings and sculptures as the basis for the construction of her images or their metaphorical allusion, as happens with the composition of the shell-shaped jewel box made with bread overflowing with gold necklaces, pearls and precious stones, presented as a reflection and synecdoche of the penitent Mary Magdalene. This emphasis on the idea of bread as spiritual nourishment, as exemplified in Ecce Homo (2020), Dough is like a Baby (2020) or Anchorite (2020), questions the nature of both bread and spirit, as well as the affirmation of its formlessness or, in Christian terms, the mystery of its nature. In 1929, Georges Bataille opened the entry for ‘informe’ (formless) in his Dictionnaire—written and published in instalments in the journal Documents—by underscoring that a dictionary begins when it no longer gives the meaning of words but their tasks; therefore, he addressed informe from its materialization: a squashed spider or a spit. Taking this dictionary entry as their point of departure, Rosalind Krauss and Yve-Alain Bois accepted ‘formless’ as an operation that enables, at the same time, manifold ways of being formalized (Formless. A User´s Guide, 1997). It remains for us to wonder what is the nature of the operation of displacement that Alfaro proposes in these collages, where bread occupies the place of representation of God or his manifestation: Baby Jesus, a crucifix, the revelation of repentance or the body of St Bonaventure. Biblical quotes, pagan cults and popular beliefs are mixed together in her work; as are the ambivalence between oven and Eucharist. The result of this intertextuality is a body of works in which the ungraspable and formless quality of divinity defended by believers is altered by production and manipulation, by the religion of industrialization and progress, which transforms the formless mass of bread into a roll, a baguette or a loaf. 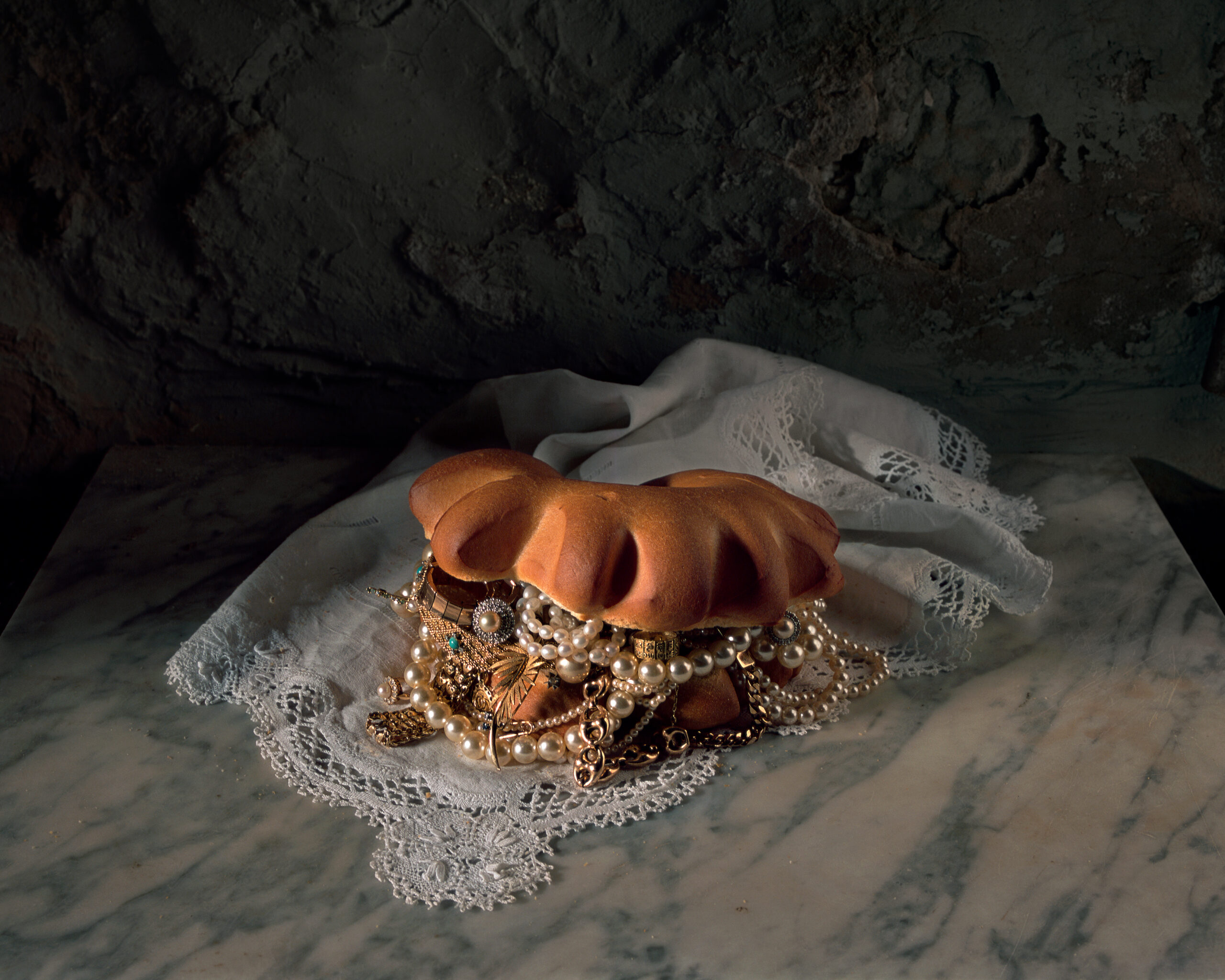 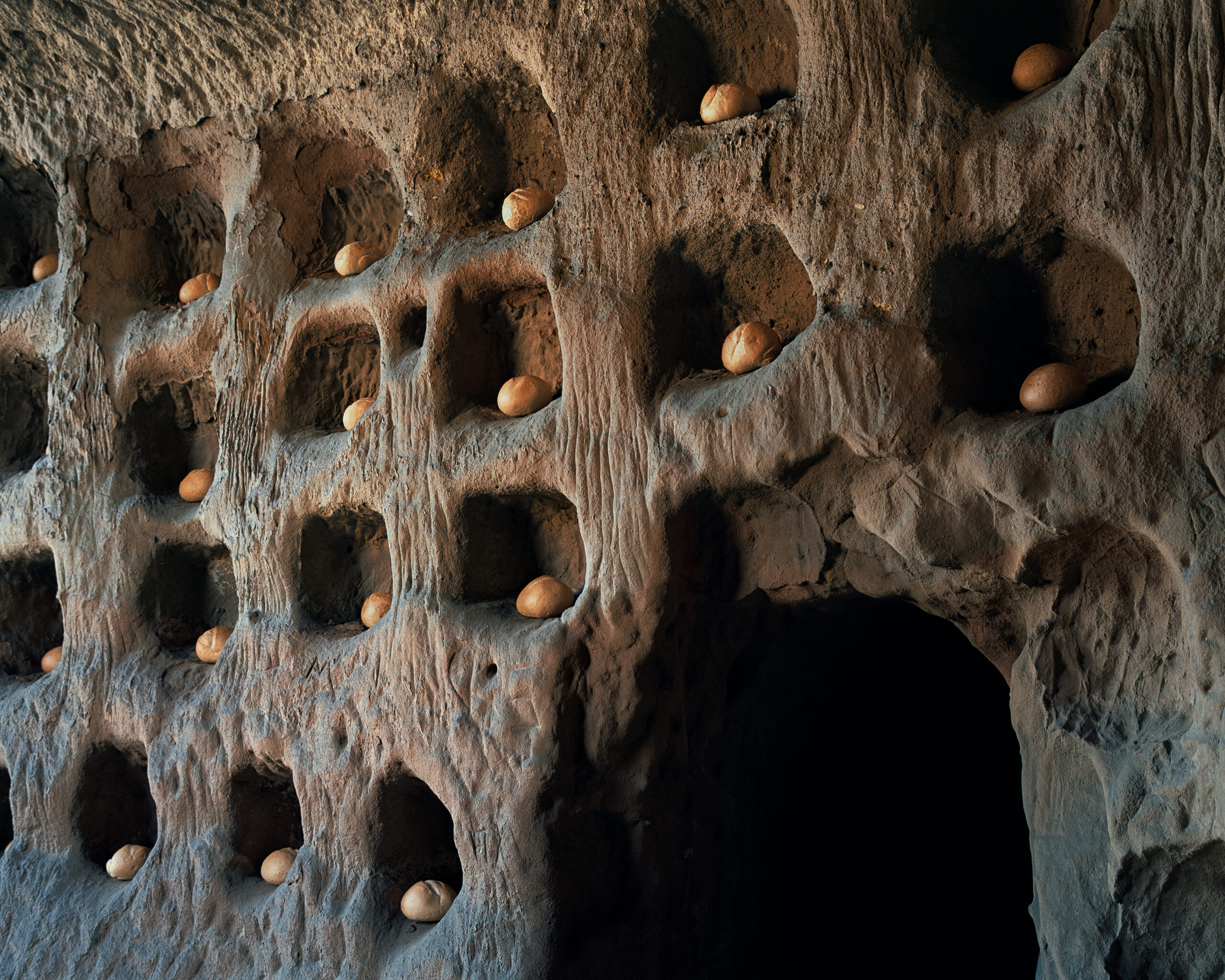 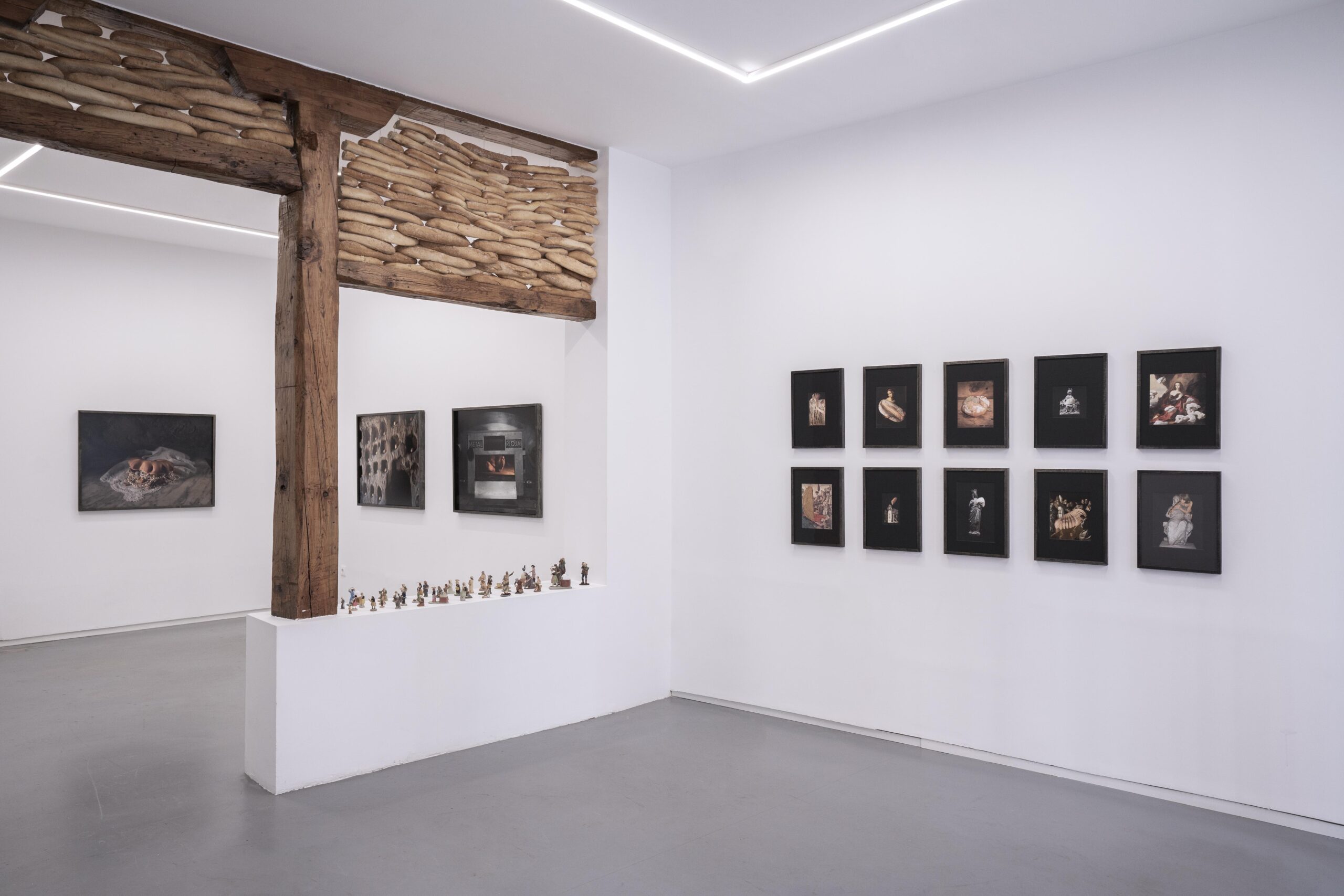 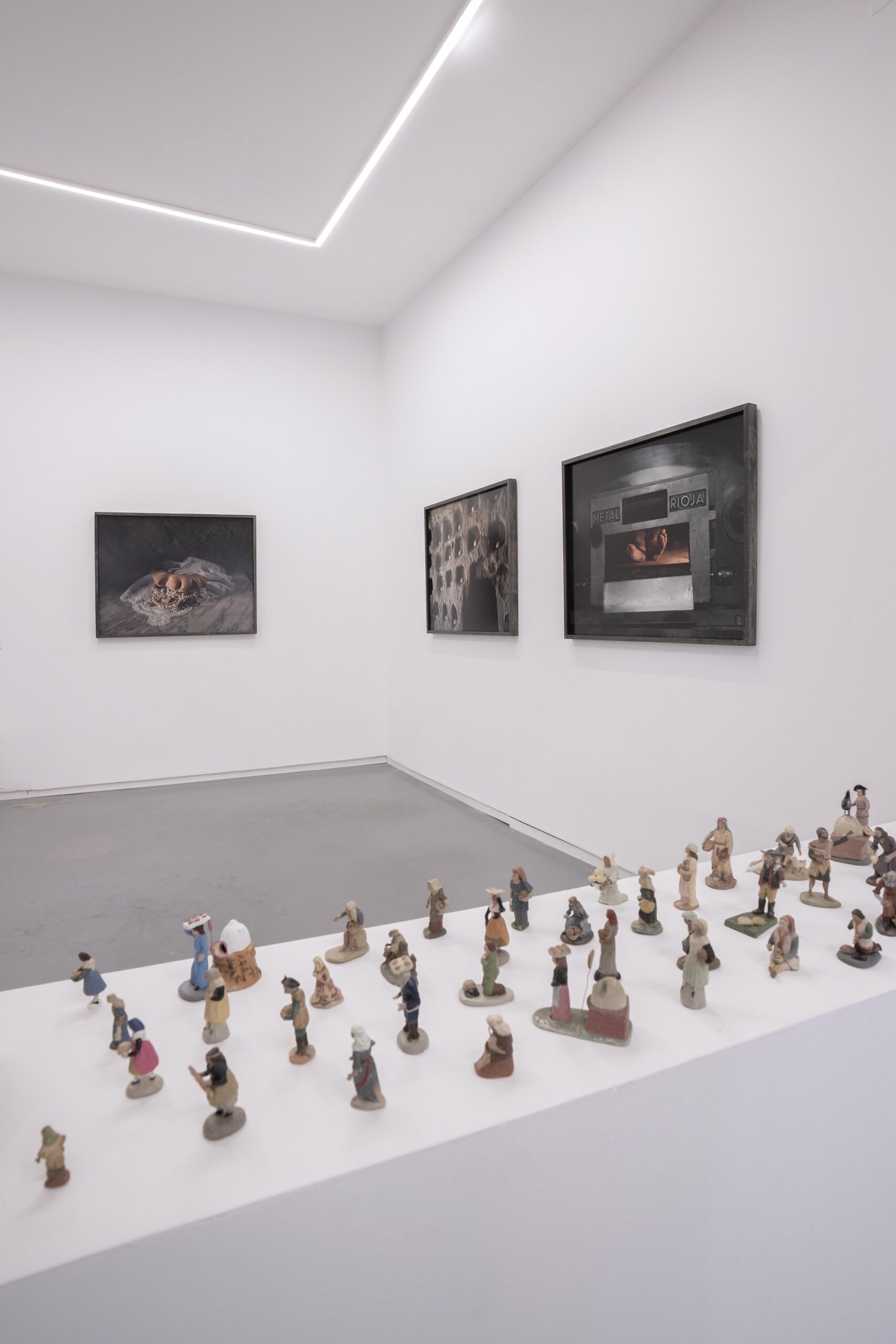 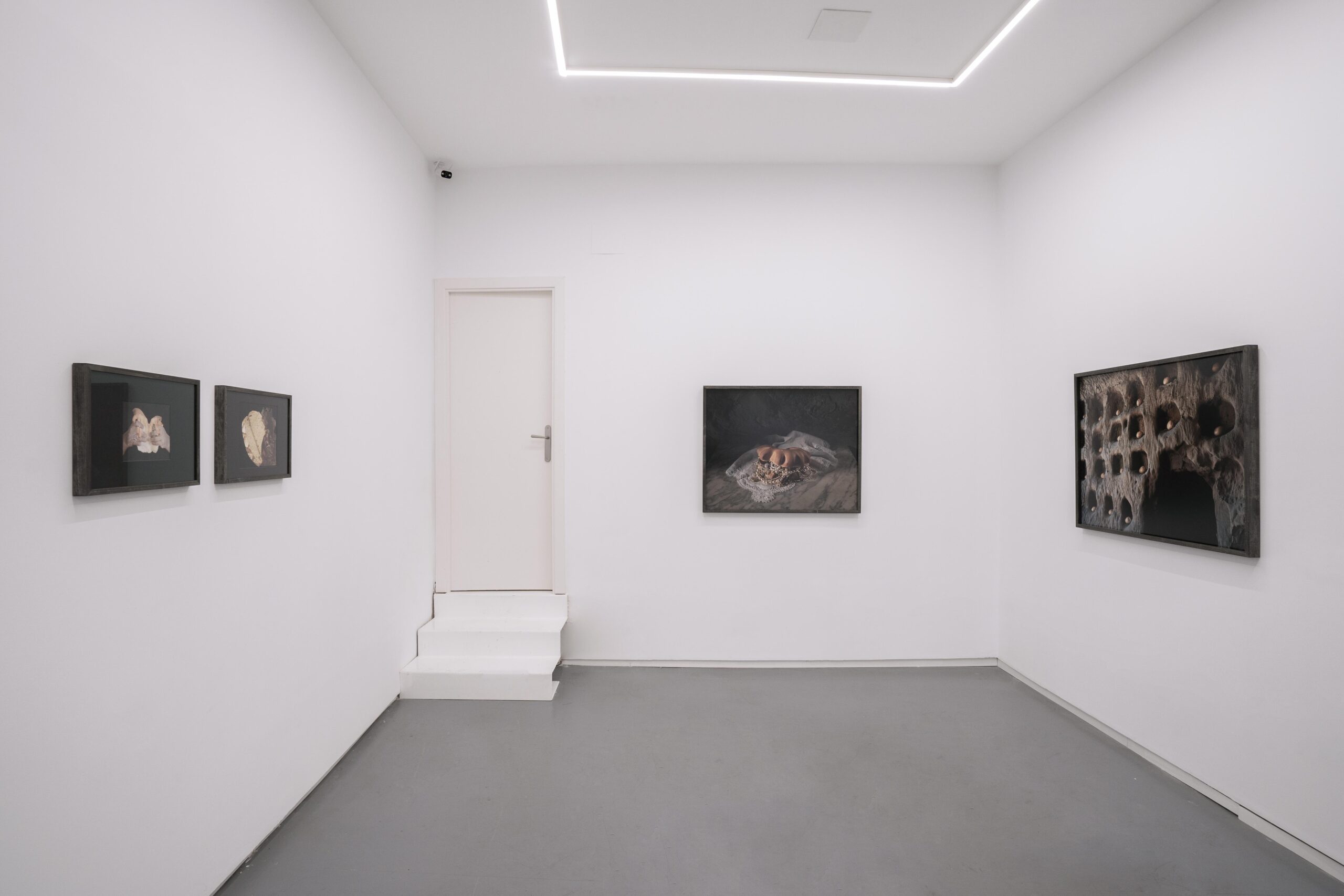 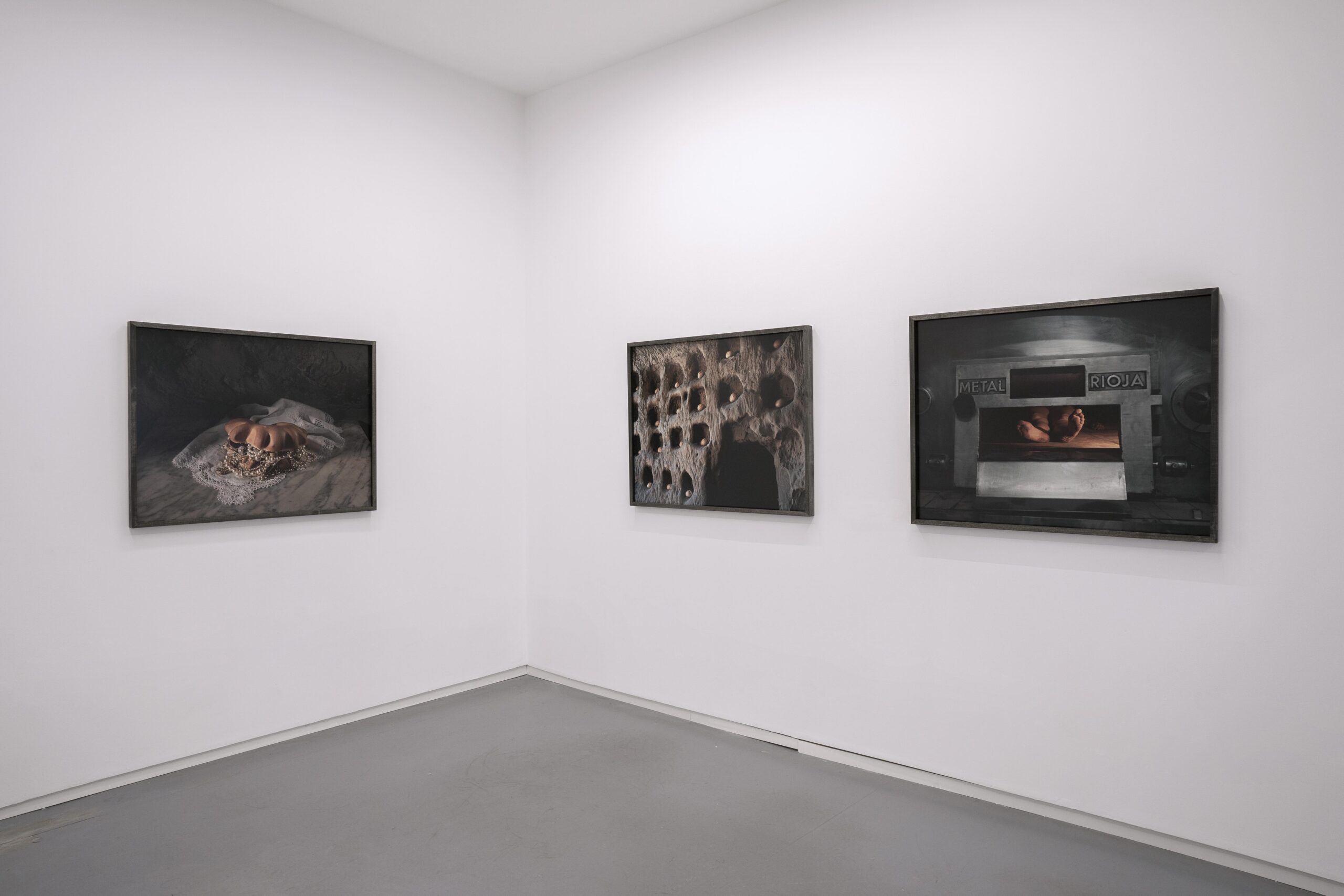 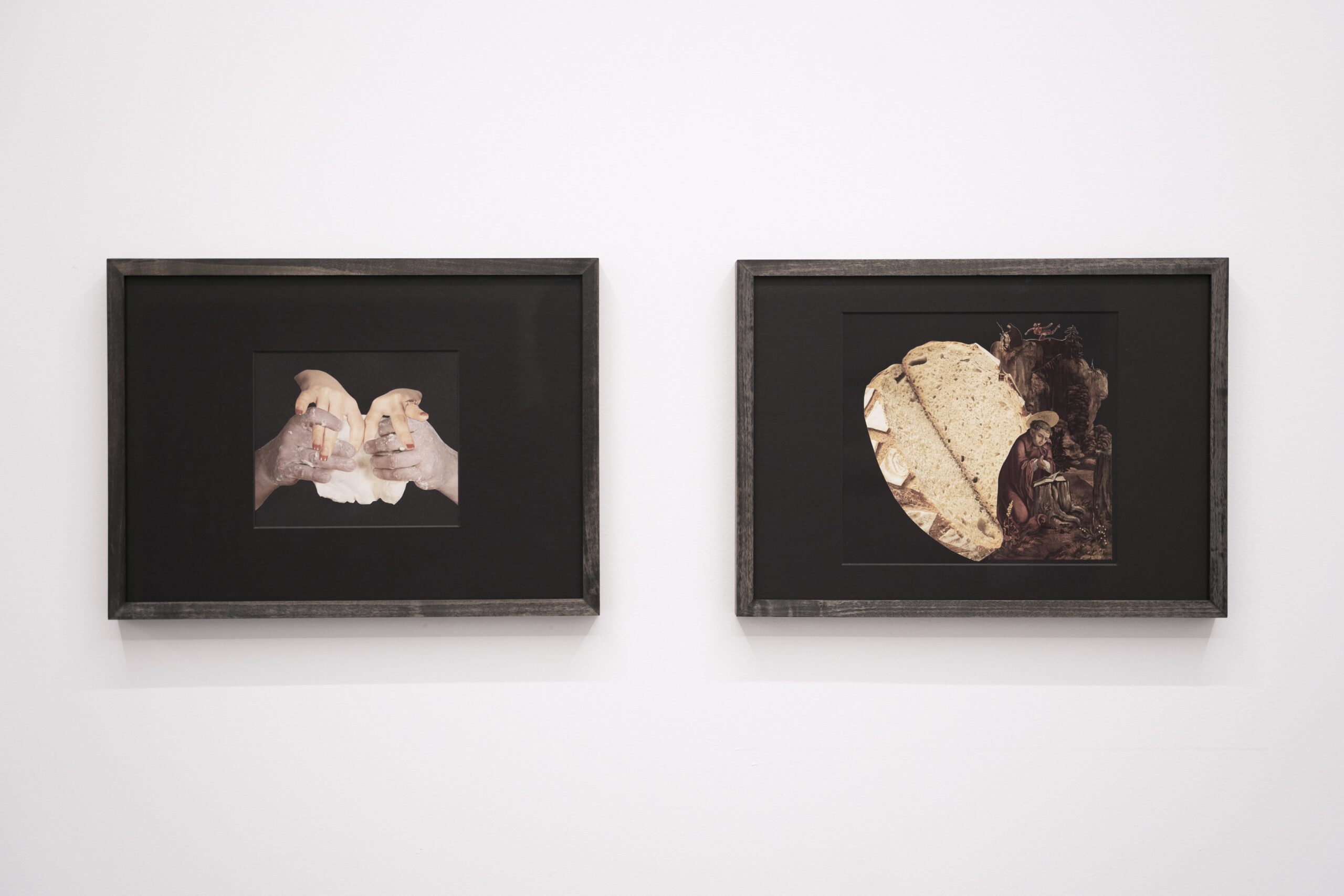 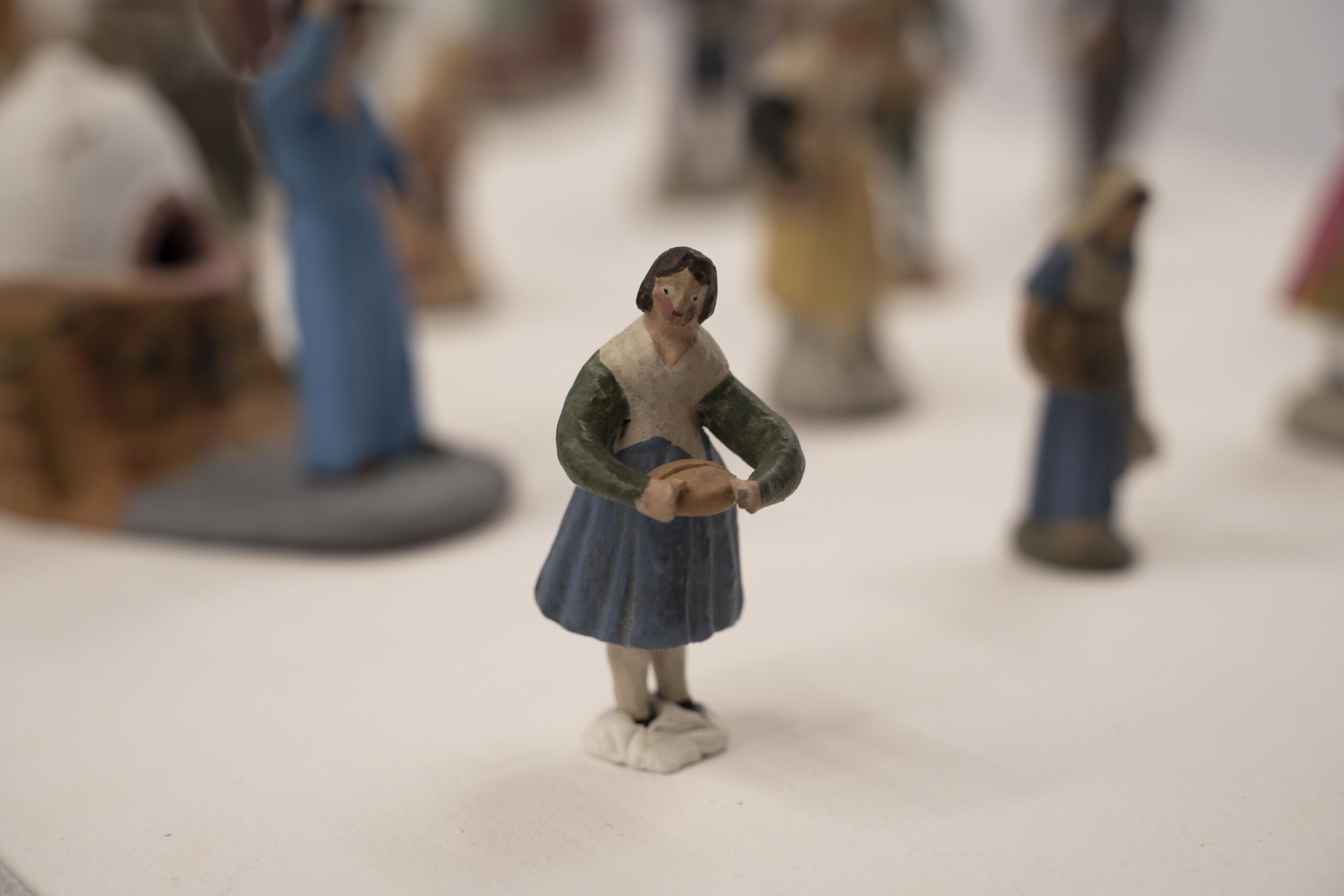 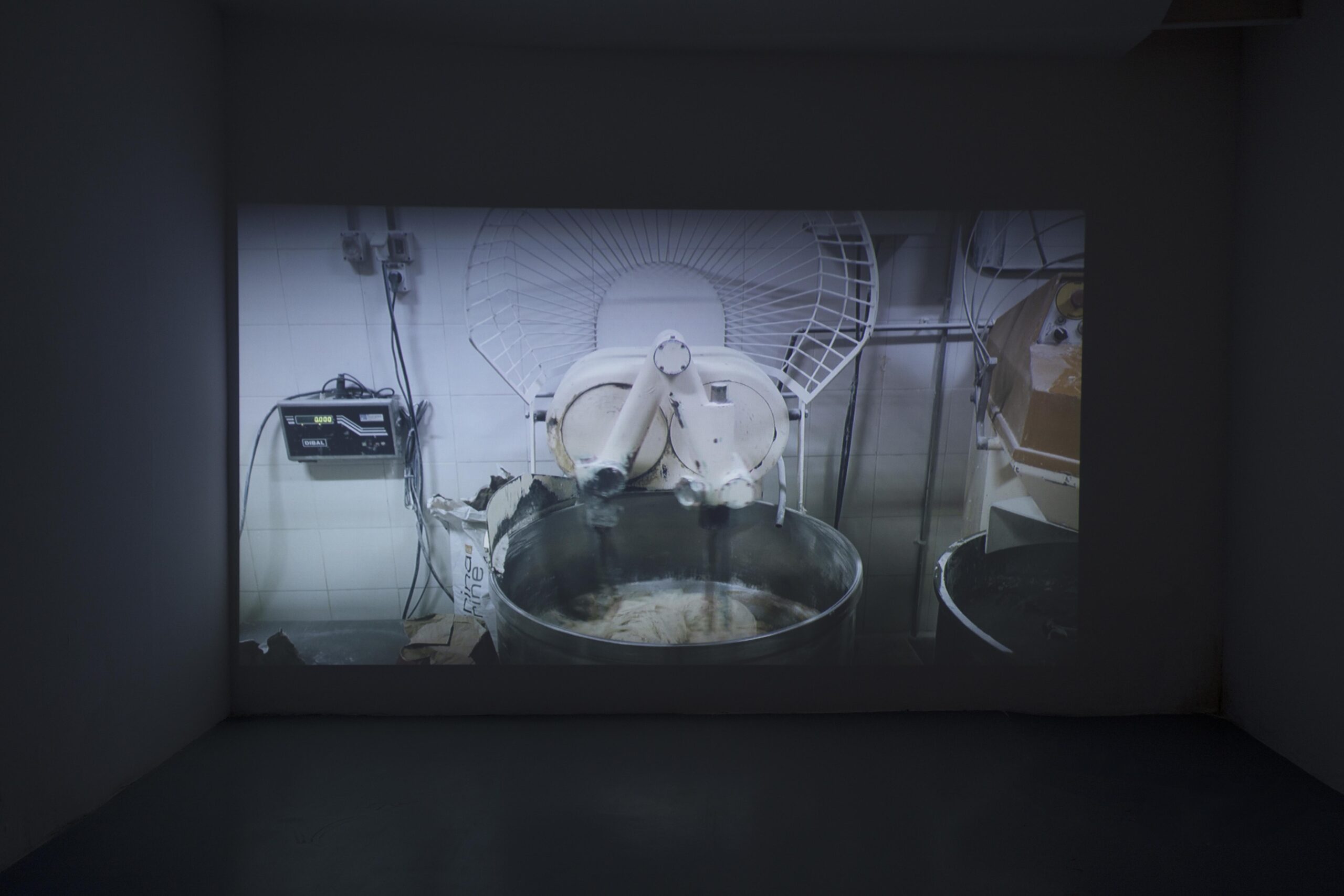