The Revolt of the Artefacts

Spindle and spinning. Knots and data. A span of many millennia lies between the first cultivated cotton yarn dating back to 4200 BC, found in the archaeological site of Ancón, Peru, and the transoceanic connection of the Marea cable laid between Bilbao and the state of Virginia, USA, in 2018. The times and places are […]

Spindle and spinning. Knots and data. A span of many millennia lies between the first cultivated cotton yarn dating back to 4200 BC, found in the archaeological site of Ancón, Peru, and the transoceanic connection of the Marea cable laid between Bilbao and the state of Virginia, USA, in 2018. The times and places are so far removed from each other that only a ghost could visit them, yet, nevertheless, they can be woven together through their fibres: the organic thread used by pre-Hispanic native peoples in their weavings, and the fibre optic that transmits digital information at 160 terabits per second. Material and algorithm are entwined in similar coding processes based on patterns, in the weaving of a fabric as the core axis of their structures. This is the analogy that underpins the story told by Andrea Canepa, who begins by recovering a phantasmagorical and rebellious spindle of ancient myth and using this artefact to give a woven-body to the immaterial information on the fluctuating value of the cotton futures market.

In the imaginaries of the Moche and Japanese worldviews, when objects usurp control, taking on their own agency, which is to say, arrogating the power to act in the world, they pose a real threat to man. The myth of “the revolt of the objects”, as depicted in one of the mural paintings in a temple of the Moche culture in northern Peru, as well as in some ceremonial ceramic vessels, tells how one night, a long, long time ago, tools rebelled against their masters, throwing off their shackles as slaves only to enslave humans. This period, ruled by a Moon goddess, ended with a “return to order” imposed by a male Sun god, whose plan is shown in the mural in the form of a geometric grid. On the other side of the Pacific, tsukumogami is the name given to objects which acquire a soul or spirit when they reach 100 years old, and so become part of Japan’s world of domestic deities. Although irreverent by nature, they do not completely subvert the ruling order, rather they try to throw it into disarray, angry at having been cast aside. Angry because they are no longer useful tools, but things without utility. Useless things personified. Things that, like in The Sorcerer’s Apprentice, the poem by Goethe that inspired Disney’s Fantasia, do not serve our purposes but instead turn the nonhuman taking of independent action into a nightmare.

Spindles without spinning. Things without a function but which were once the haptic measure of our relationship with the world: I stretch out my hand, my fingers grasp the shuttle that will help me to pass the weft through the warp, and my skill is improved and perfected. Not only that, I feel the softness of the cotton thread in the same way that, concentrating on the sensitivity of my skin, I can caress light because I feel its warmth. A tool is an extension, though not only productive, as it becomes part of the relational network of reality.

The anthropologist Tim Ingold argues that “art and technology are mere words”, abolishing the modernist division between body and object, between natural and produced. In his proposal, he approaches “making” as a form of “weaving” that implicates us in a production which is both conscious—a creation—and engaged with all the entities involved in it, understood as interwoven non-hegemonic surfaces. Like a great corporeal and affective fabric in which it is impossible to differentiate between organic and nonorganic. Like a net that provides support and protection. Like a vast mesh.

Cross through three large see-through curtains. In them, in their abstraction, in their appearance and disappearance, in their concealing and revealing, new ghost objects invite our body to dance, to caress the forms of what was a legend, to make it tangible before our very eyes. To give back the spindles a perceptive relational use, present both as material and as image.

In digital virtuality, we no longer touch things and instead just slide our fingers across screens. In his book And: Phenomenology of the End, Franco “Bifo” Berardi differentiates between two kinds of relationships that affect our perception, our neurobiological conformation, and, as such, our ways of being in the world. The first is given by conjunctive concatenation, proper to time removed from space, and is created from juxtaposed learnings of the rationalist digital order. The second, connective concatenation, takes place in the spatial consciousness of otherness, and of the other, and is created in the sensitive connection in the coevolution of different cultural regimes of subjectivation.

Now we teach objects to do things on their own. Based on an initial series of data and parameters, machine learning is able to predict future values of such data and therefore take control over certain decisions. The independent action of nonhuman objects is no longer just an imagined possibility: the Internet of Things is a reality in which, at times without even realizing it, processes are activated by a machine. It is given a matrix of binary options, a “0” and a “1”, that establish a multiplicity of almost infinite options in their conjunctive concatenation, recalling the first programming cards of Jacquard weaving machines, one of the forerunners of productive computation. 0+1 connect, but we cannot touch nor sensitively interweave ourselves into the programming process. And our touch is gradually numbed, our perception desensitized and distanced from tangible reality.

Touch the fabric, inspired by the method of the mathematician and weaver Ada Dietz in 1949, in which she adapted polynomial algebraic expressions to textile making. Data are not random. They are the factors that predict the consumption and sales value of the material itself, the cotton. With them, Vanessa Foster, also a mathematician and weaver, who collaborates with Andrea Canepa, defined an algorithm and turned it into a polynomial that would become a textile pattern: the width of the threads, the colour codes and the type of weave. Accordingly, it can translate volatile economic data. The algorithm constructs the material structure of the fabric. It dictates the interweaving of the threads. To give back the spindles a perceptive relational use, present both as material and as information. 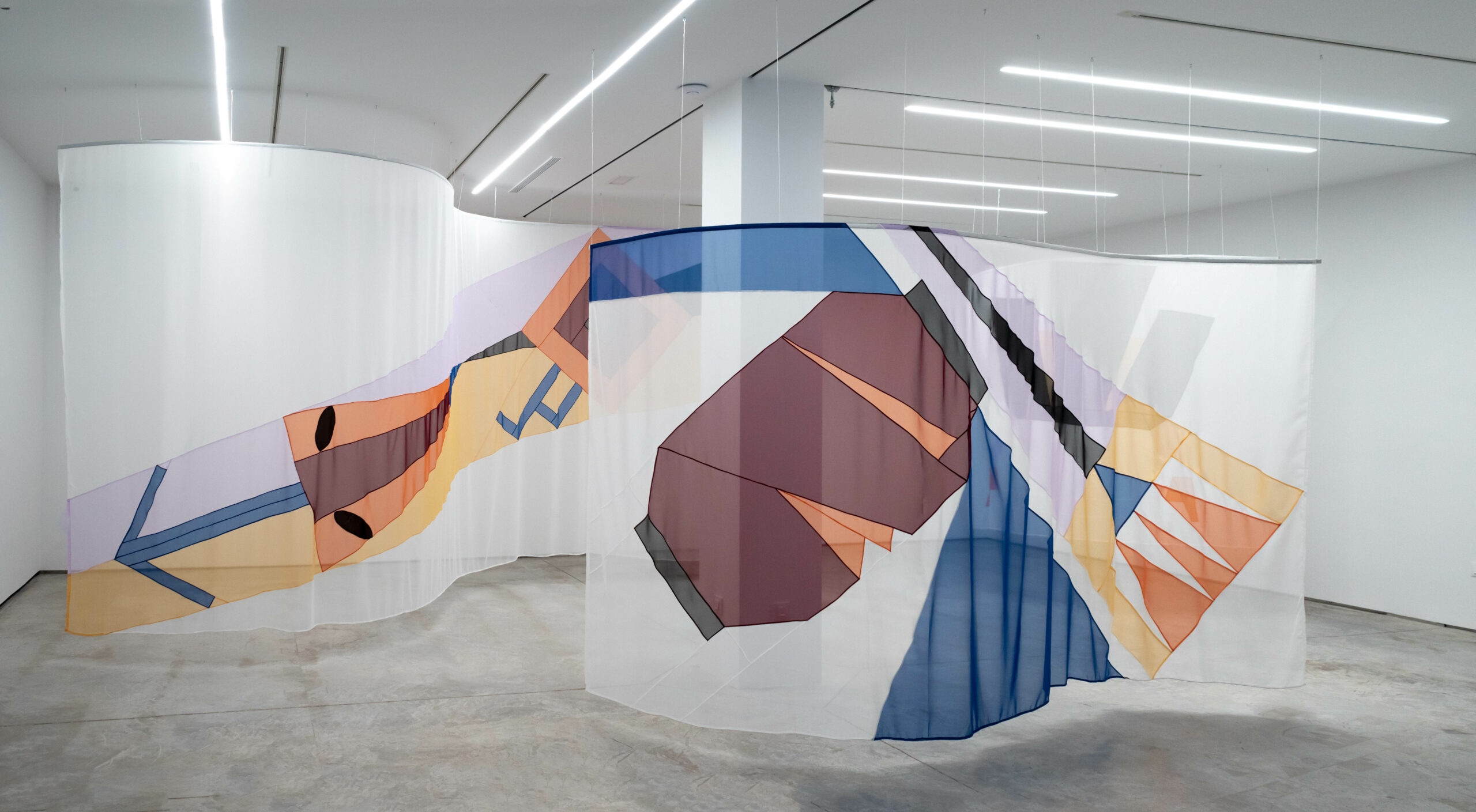 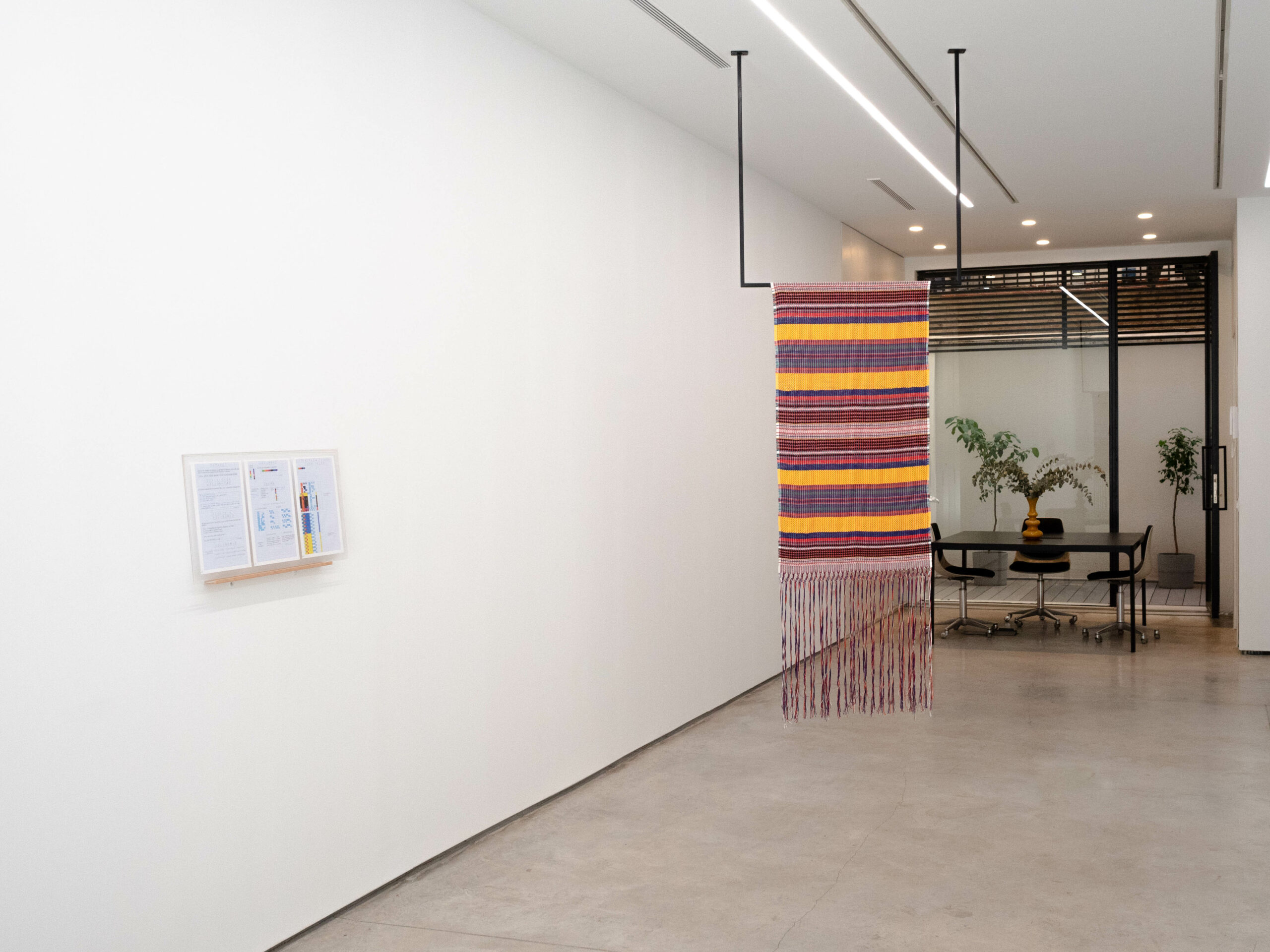 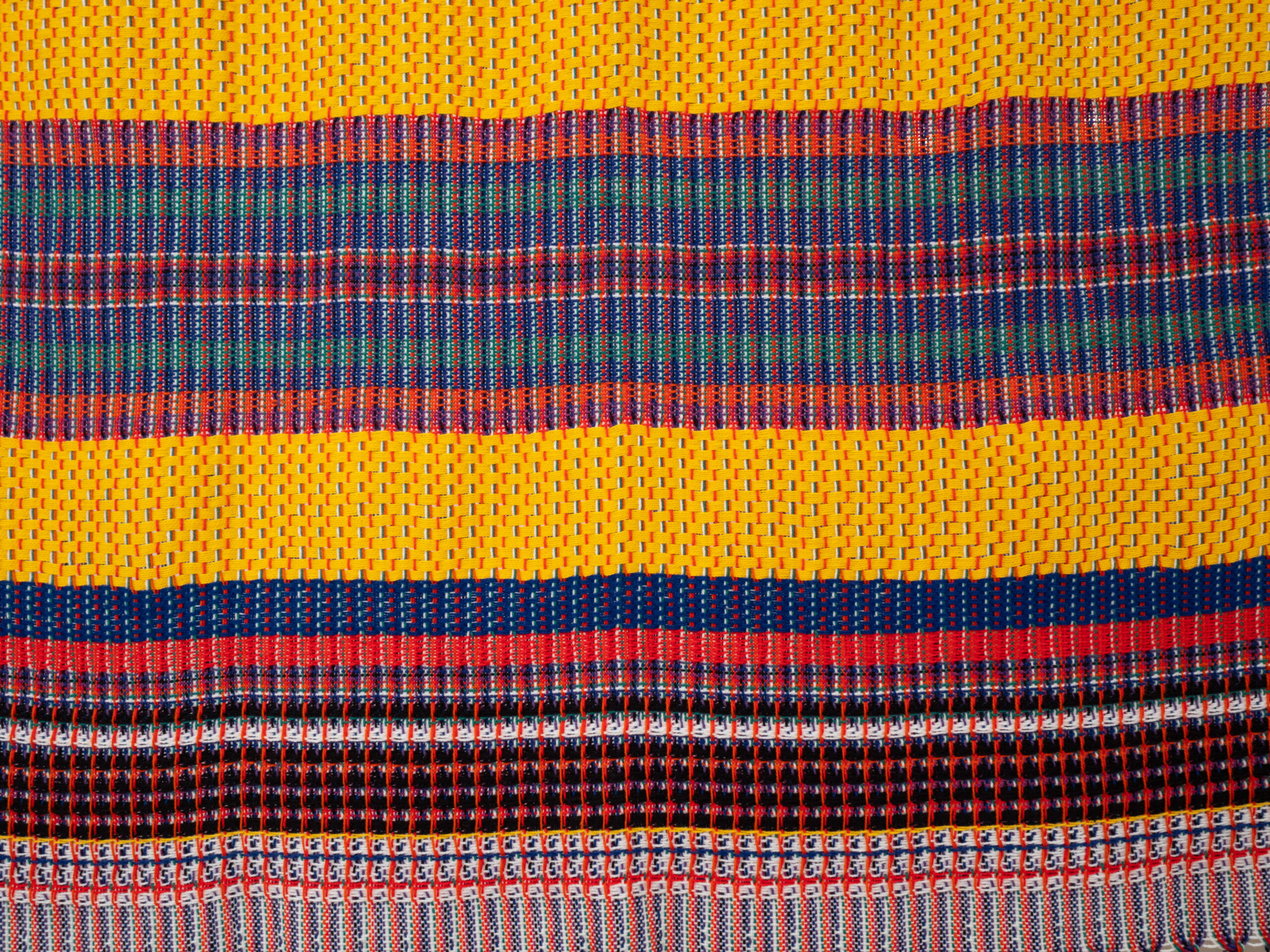 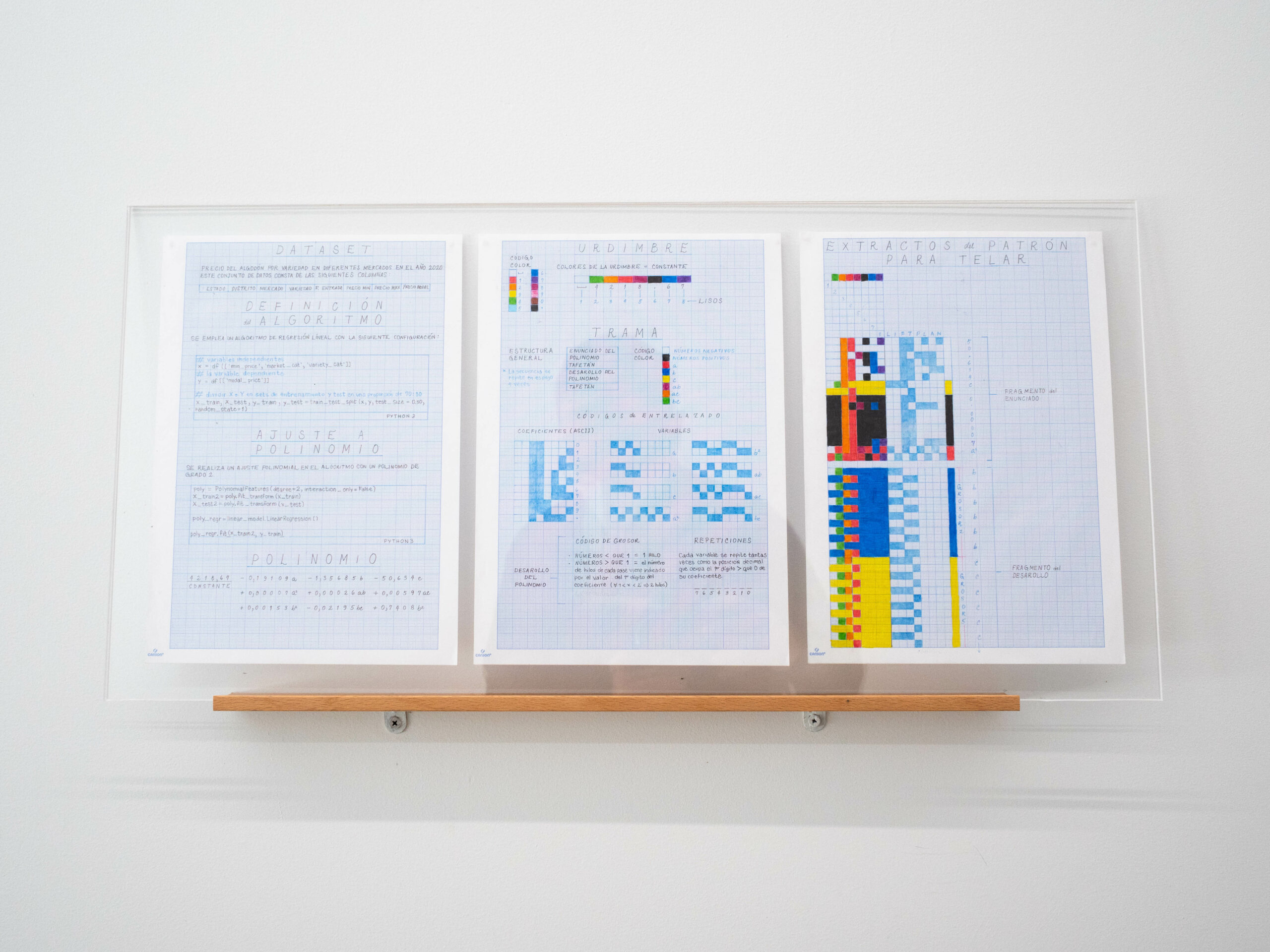 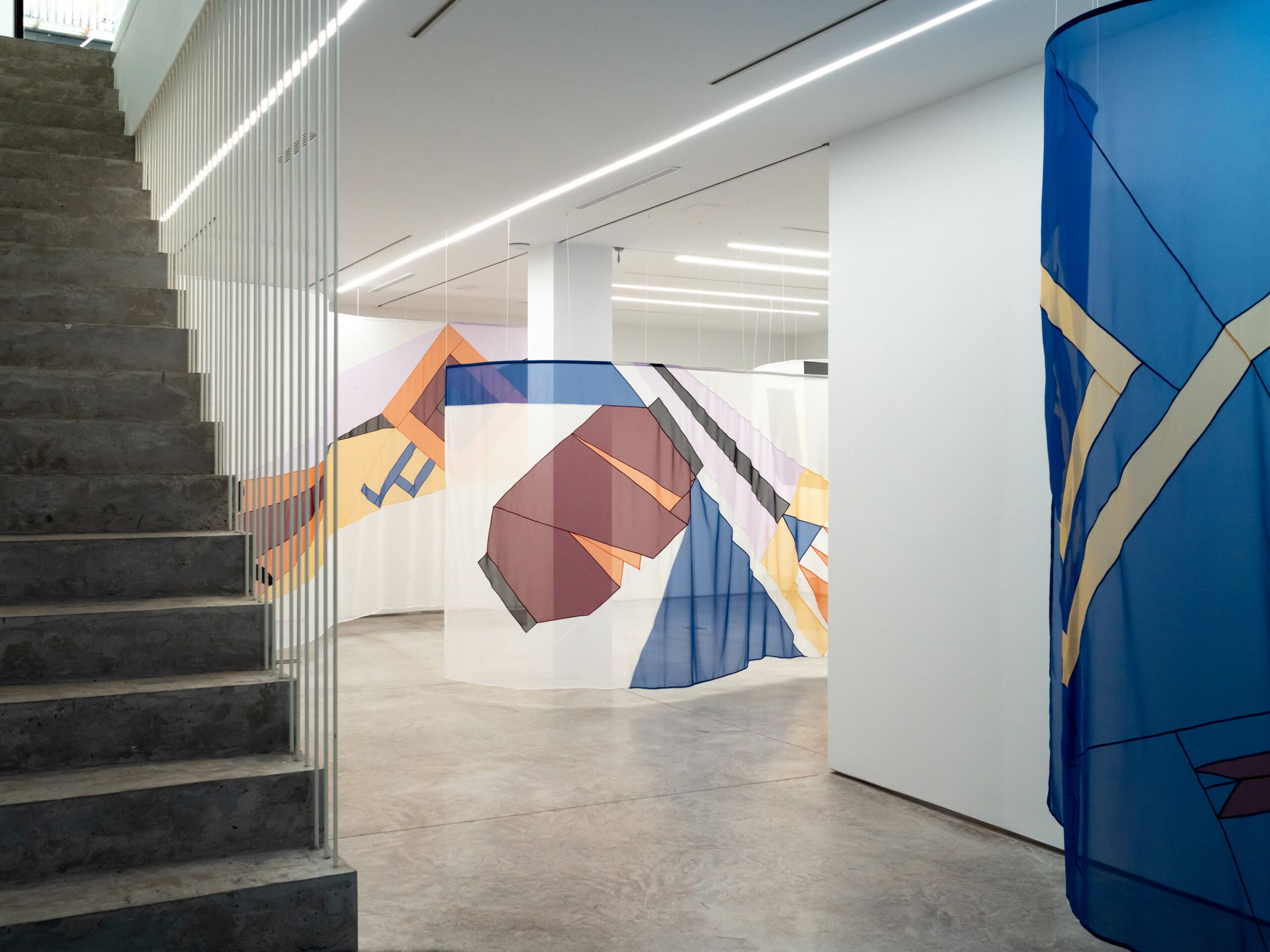 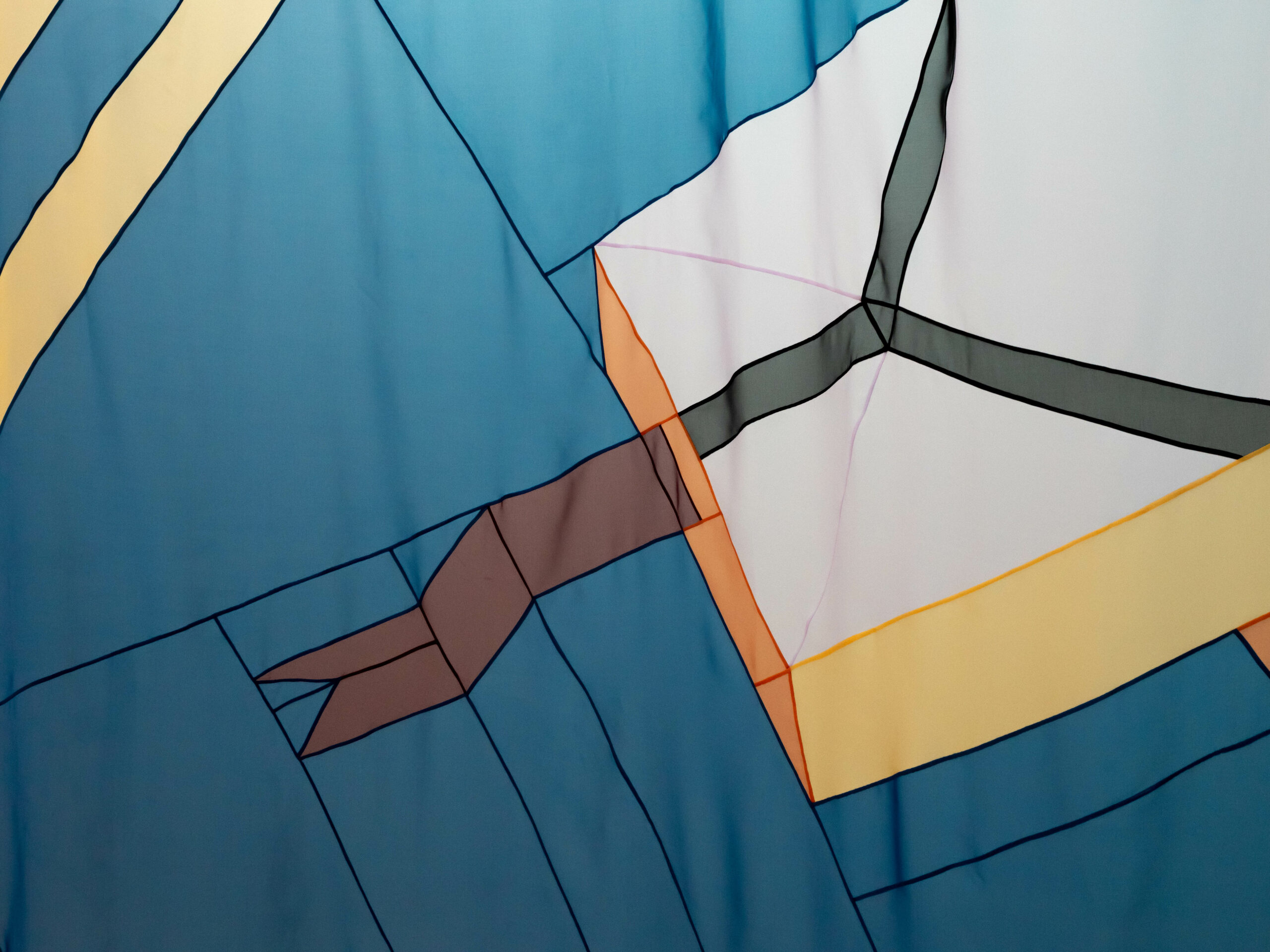 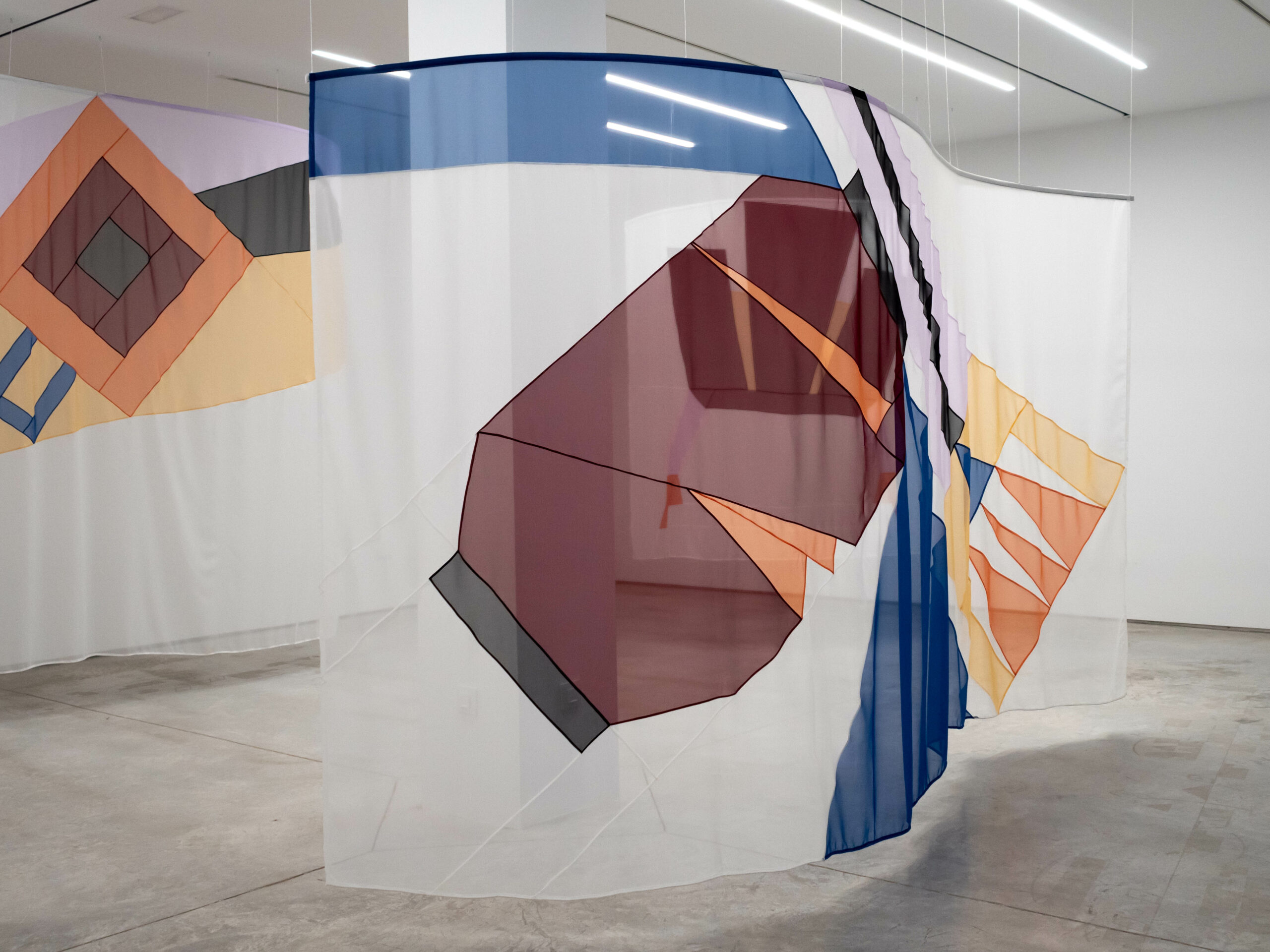 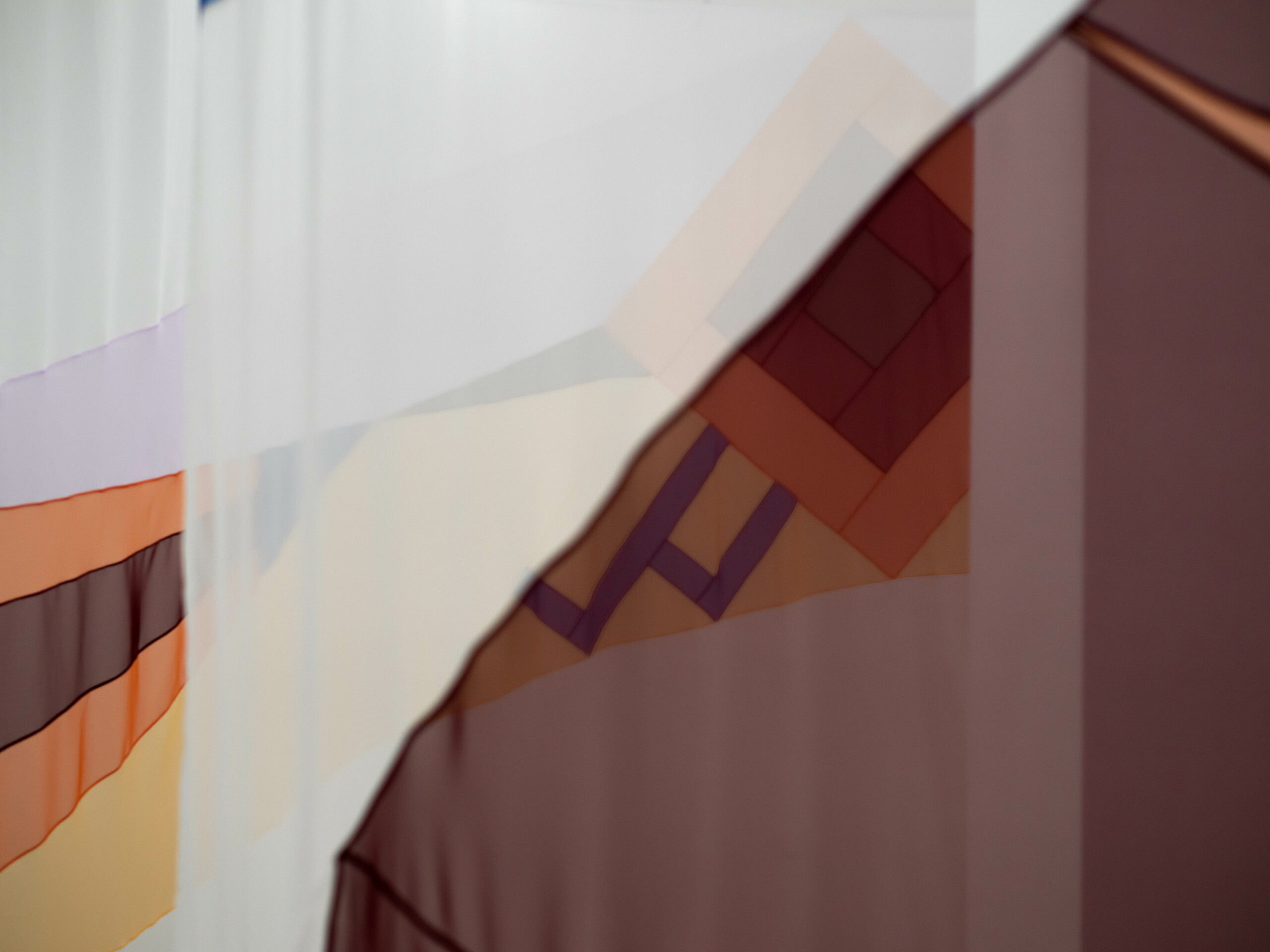 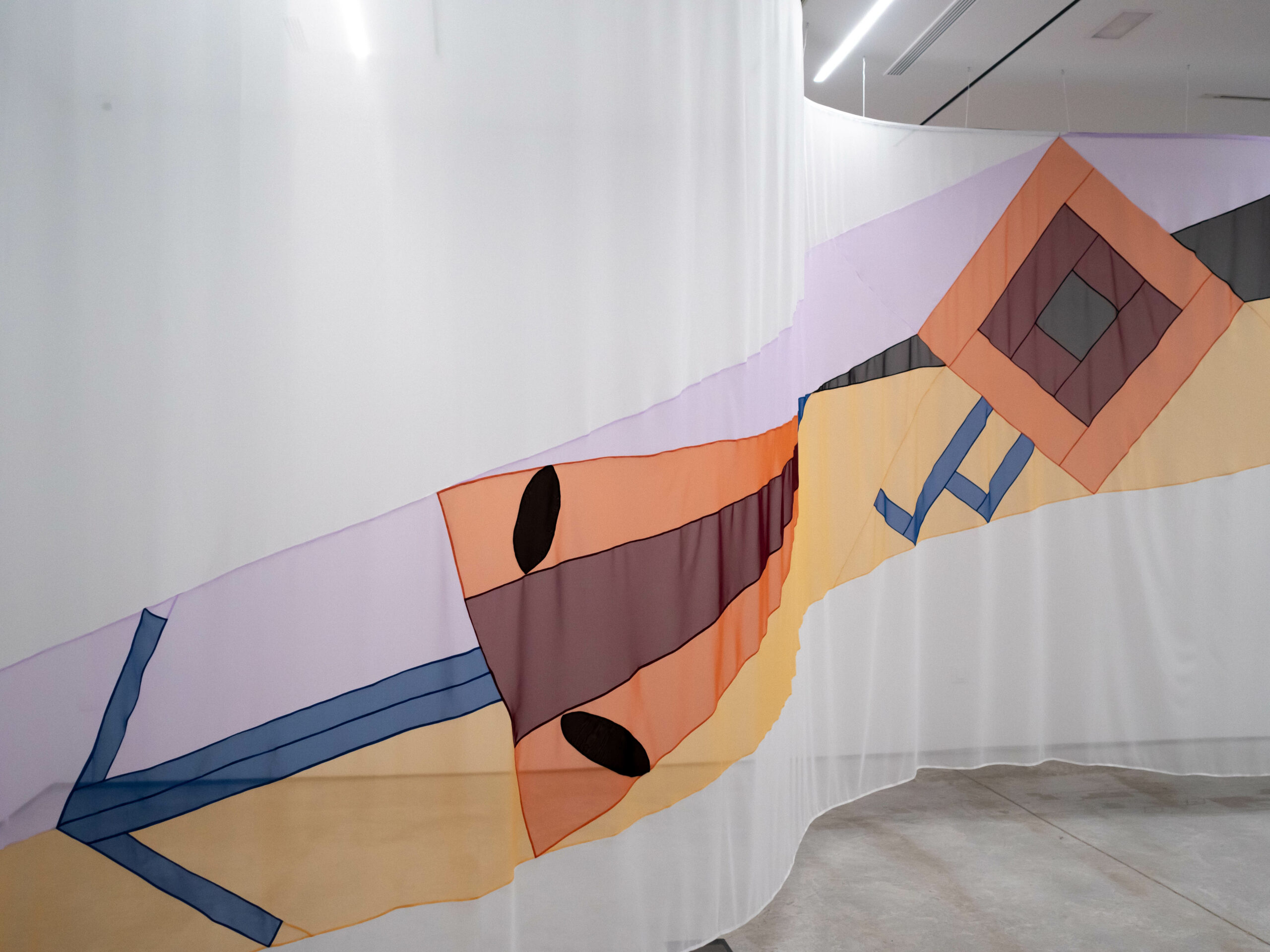 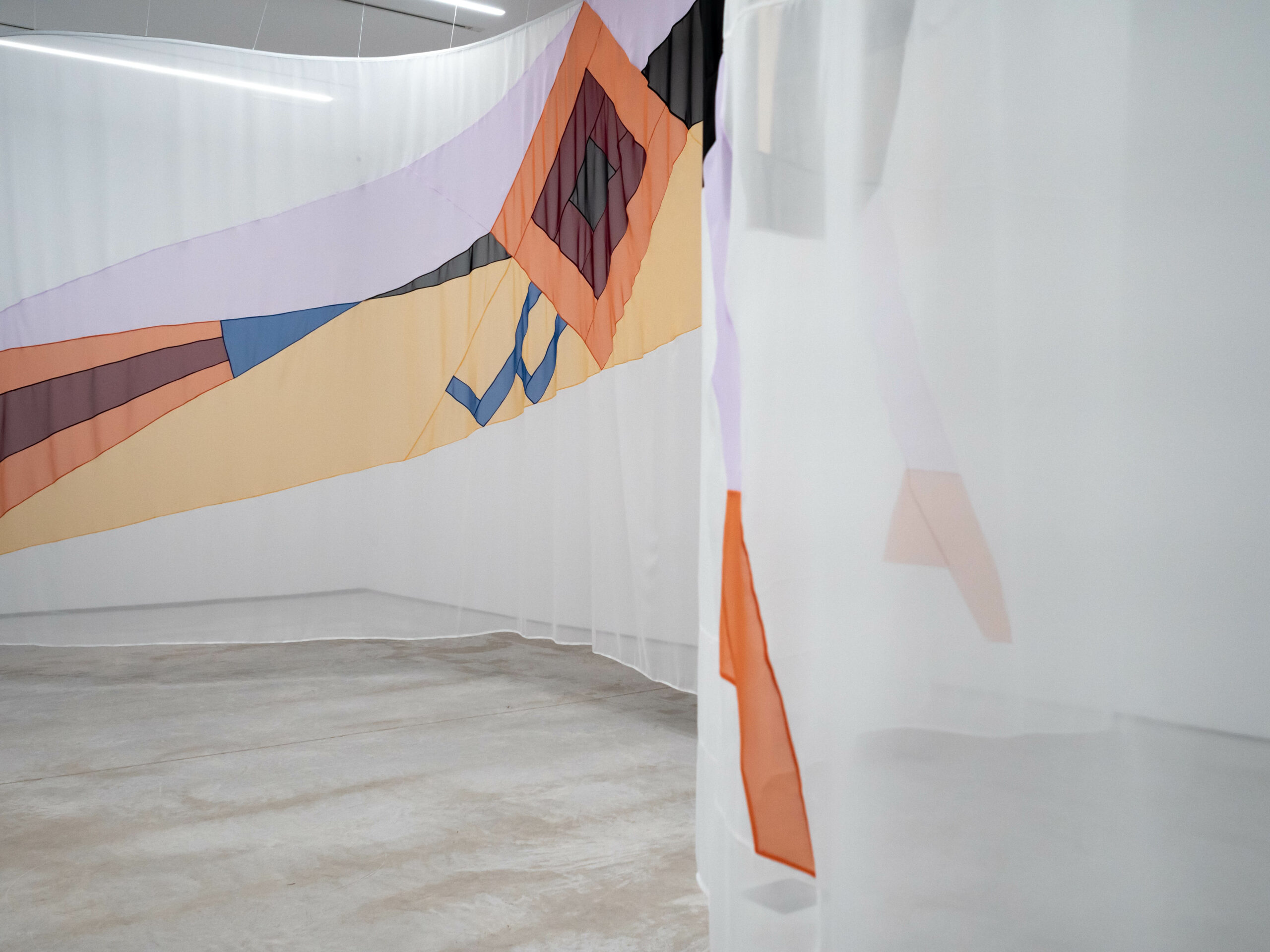 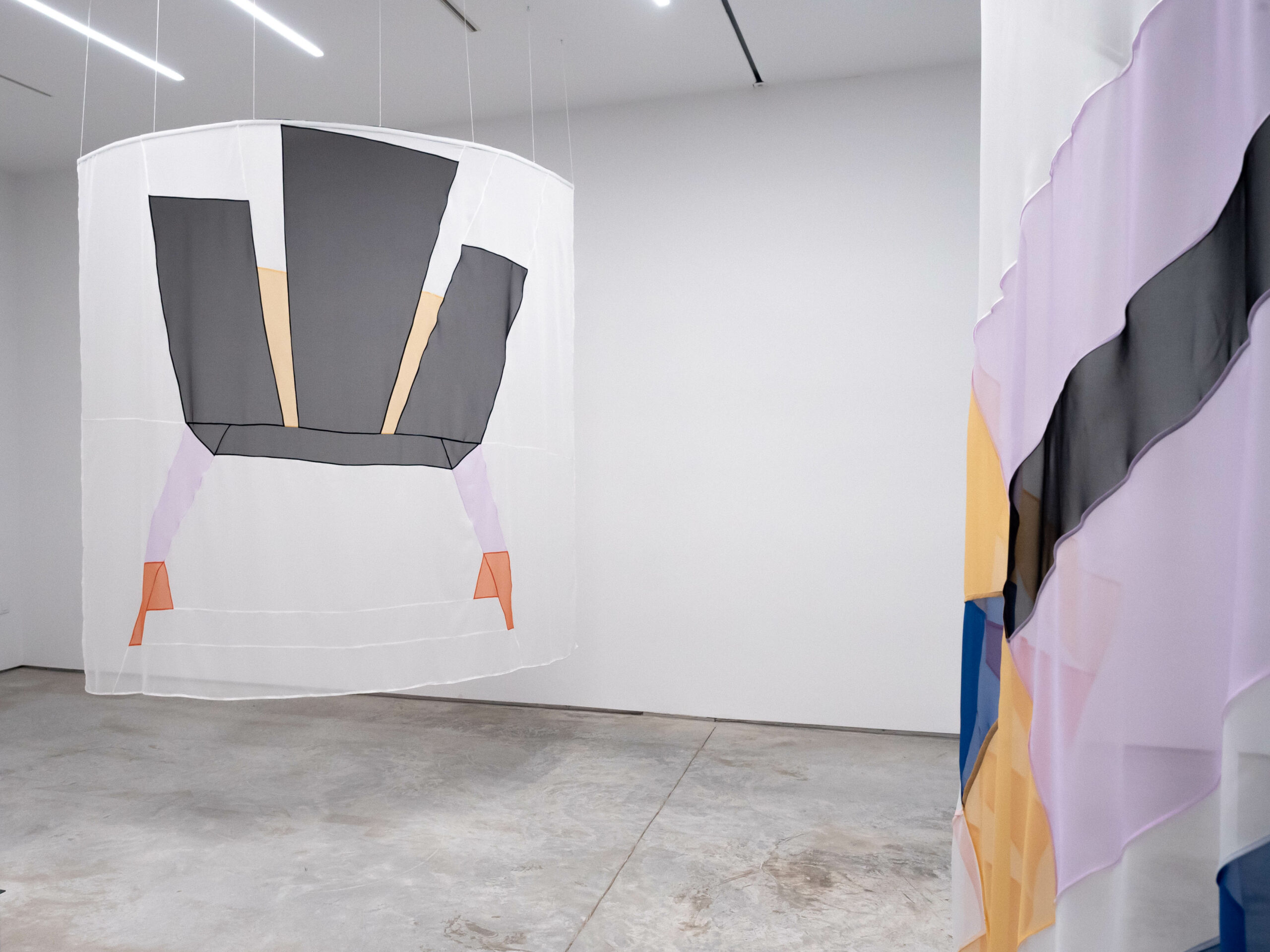 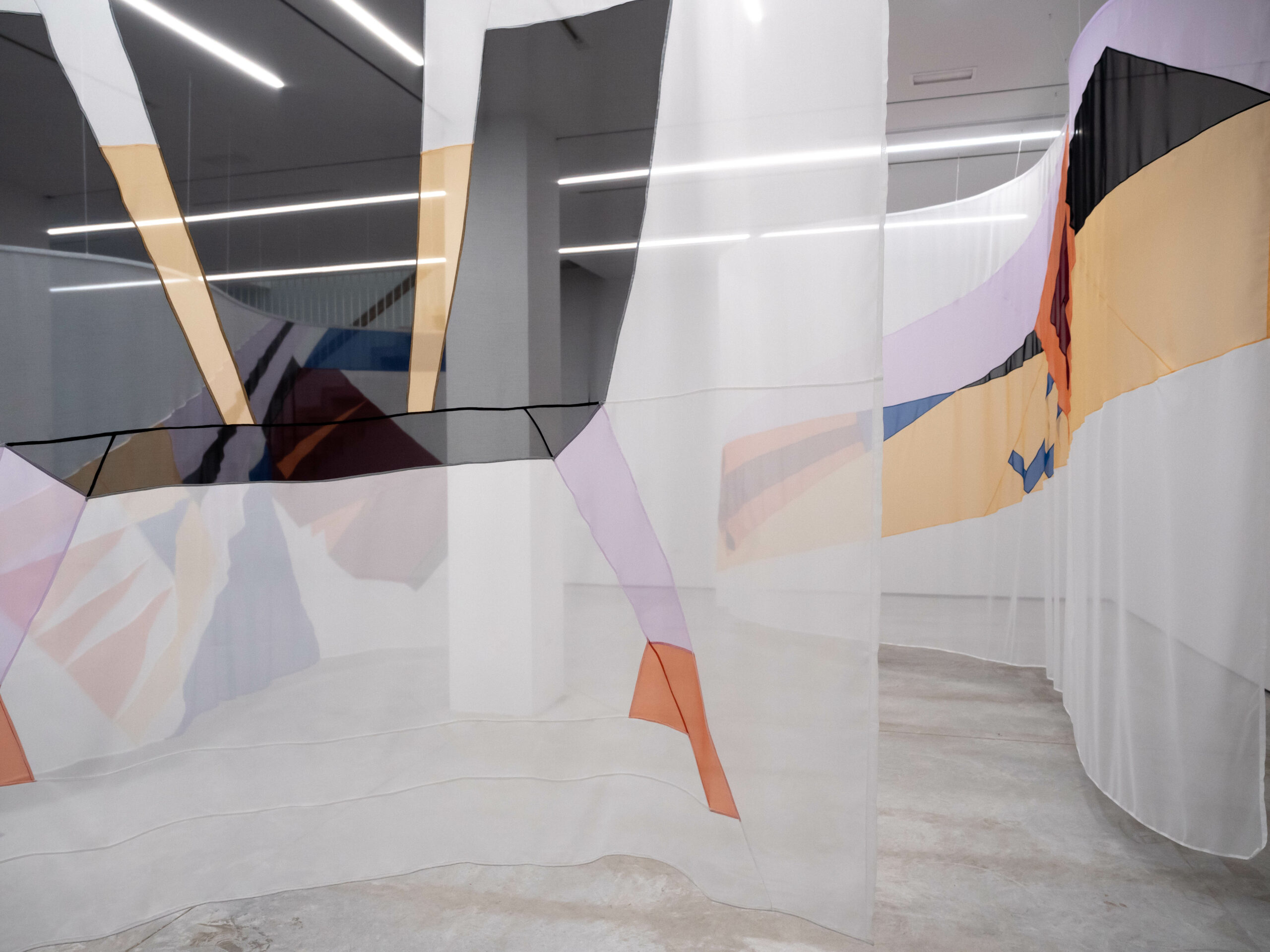