Galería Rosa Santos (València) 25/03 – 20/05 The police records[1] which came into being in nineteenth-century France gave rise to what we now know as the ID card, a grid-like document associated with an individual person which includes their photo and apparently neutral and objective descriptions of origin, age, physical appearance and marital status as […]

The police records[1] which came into being in nineteenth-century France gave rise to what we now know as the ID card, a grid-like document associated with an individual person which includes their photo and apparently neutral and objective descriptions of origin, age, physical appearance and marital status as well as other characteristics that change with the passing of time. Yet, right from the get-go one could intuit that these records were going to be used for classificatory and control purposes, first of all for prison inmates and criminals; and then for trade unionists, anarchists and women; and finally for the whole population. In Carta de Quebrados (Broken Colour Chart), Chema López builds his work around the history of these and other similar documents that are or were in use in different parts of the world and in different historical moments. Some might be enlistment papers used in wartime, while others were introduced to identify, catalogue and segregate various social groups. That being said, the walkthrough proposed here is not just a comparison between individuals according to their institutional categorization, but rather an exploration of the manifold layers of a conflict, as well as power plays, abstractions, camouflage and the propensity for social impact.

If we were to cast a look back at his previous projects, we could claim that López’s work is characterized by linguistic and referential versatility. On many occasions they afford space for painting, drawing, photography and narrative modes such as film and literature, in varying degrees. In addition, these elements manage to completely submerge us in the different stories the artist engages with, and which we can observe not just as passive spectators, but with the possibility of inciting reflection through each piece and its evocations. On this occasion, López uses the aforementioned documents as the point of departure to share his painstaking (and often intuitive) research into various conflicts, their many possible readings, the ideology underpinning opposing parties, and the disguises worn by both realities.

Here at Galería Rosa Santos we can find several large-format paintings in which the artist renders the cases chosen to contextualize the project, as well as a series of monochromes that reference the backgrounds of the documents in question. The detail and skill readily appreciable in the paintings allows us to clearly observe the positions that the documents defend through their particular use of language and of the personal data included in them. On one hand, in the room on the lower floor, we can see some of the slogans used to define the confrontation between Carlists and anarchists in the Spanish Civil War, as well as their respective ways of justifying the use of arms—for some it was a divine calling, while for others it was a case of social responsibility. The paintings also pose questions on what it means to be Hutu or Tutsi in Rwanda under Belgian domination, or even the paradox (and injustice) of accrediting a police hitman in Guatemala to spy on and arrest local indigenous activists. On the other hand, the monochromes on view on the ground floor act as a symbol of absent authority, concealed behind the issued document, lending prominence to the opposing realities of the conflict while blurring its own responsibility. A case in point would be the crucial role of the Belgian colonial legacy in the genocide in Rwanda, which tried to exterminate the Tutsi population; or how Britain used its purported institutional legitimacy to support the occupation and unjustifiable actions of Israel against Palestine.

The two parts into which this exhibition is divided are connected by a warning, visible between the gallery’s two floors, which alludes to the realism of one part as well as to the abstraction of the other and urges us to think of both from an objective and conceptual viewpoint. Carta de Quebrados is the title of this new project and exhibition which, through the paintings arranged like a colour chart, plays at being an allegory of broken tones, which is to say those obtained by mixing complementary colours and adding white. Nonetheless, this idea loses traction when we try to recognize it as such in the work of Chema López, who knows well that the devil is in the detail. Negotiating these opposing and biased descriptions of the (anonymous) protagonists of this project confirms the breach which the documents and life have opened up between what were once complementary but which ideology, power and political interests will make sure to keep far apart.

Retícula Quebrada (Broken Grid) might refer to a broken print, to a crack in a drawing or the cell-like divisions that characterize the documents shown in this project. However, if we go a little deeper it is possible to understand this ‘break’ as the social and vital reality of the women depicted. Women and families who were affected by migration, conflict, borders, journeys and prejudices, and whose lives are succinctly summarized in ID cards, residence permits and other official documents with purely descriptive classifications.

The large format and the referential capacity of Chema López’s paintings at Galería Rosa Santos’s space in Madrid allow us to appreciate numerous details in the documents that the artist has chosen for the occasion. Through his simple and geometrical composition, the language employed and the use of certain grating terms—like the classification ‘hembra’ for female, a word more generally associated with the animal kingdom—these ID cards situate us in a past reality that, nevertheless, still lingers into the present. One could well claim that, together with other informative structures, it is these institutional categorizations that began to appear in documents (‘immigrant’, ‘refugee’, ‘Arab’, ‘Spanish’, etc.), which managed to introduce false ideas and references into the popular imaginary. And so, Retícula Quebrada presents us with the challenge of critically reflecting on the different masks of power and how it can manifest itself in words, in images or even in ideas with the object of conditioning and delimiting socio-political relations.

López’s project also uses images of women to suggest a formal association with the work of the painter Francis Picabia. Precisely one century ago, Picabia opened the exhibition Máquinas y Españolas,[2] in which he showed a disjointed series of paintings; on one hand, traditional and exoticized (from a French perspective) depictions of Spanish women wearing a mantilla and, on the other, abstractions bordering on constructivism. The exhibition by Picabia—French by nationality, Spanish by origin, and stateless by choice—and his stereotypical paintings of women from southern Europe and northern Africa, provide a conduit that connects with the biased and categorical descriptions of the documents. At once, Picabia’s machines are referenced here through the geometric creations López extracts from the colours, lines and grids taken from the Spanish identity documents of various women living in Western Sahara around 1970.

This project’s knowing nod to machinery, its cogs and the system and how it is built up around lives, differentiating one from another, segregating them and dividing them, is neither coincidental nor incidental. It is the machine that issues the national ID card, the certificate to renew a French residence permit with the category of ‘Spanish refugee’, or the work permit for a migrant Algerian family catalogued as ‘Espagnole’, but it is also the same machinery that, running on the cogs of the system, grinds to a halt at a given moment in time. That’s why, like Picabia’s exhibition, Retícula Quebrada could be seen as a body with two arms, one that embraces depictions of various women, migrants and families in the paintings, and the other that relies on abstraction to underscore the trickery and mechanisms of control used by power. An interesting eclecticism brought together in the work of Chema López to question the certainties that, despite being generated through institutional images and classifications, we assimilate as intrinsic to collective reason.

[1] The anthropologist Alphonse Bertillon worked with the police in Paris to identify criminals by the controversial method of anthropometry, a technique based on the personal physical measurements of suspects which later gave rise to police records.

[2] In 1922 Dalmau, the avant-garde gallery in Barcelona, presented Máquinas y Españolas, an exhibition of work by Francis Picabia with a foreword in the catalogue written by André Bretón, in which the contrast between women and machines reinforces the Dadaist irony. 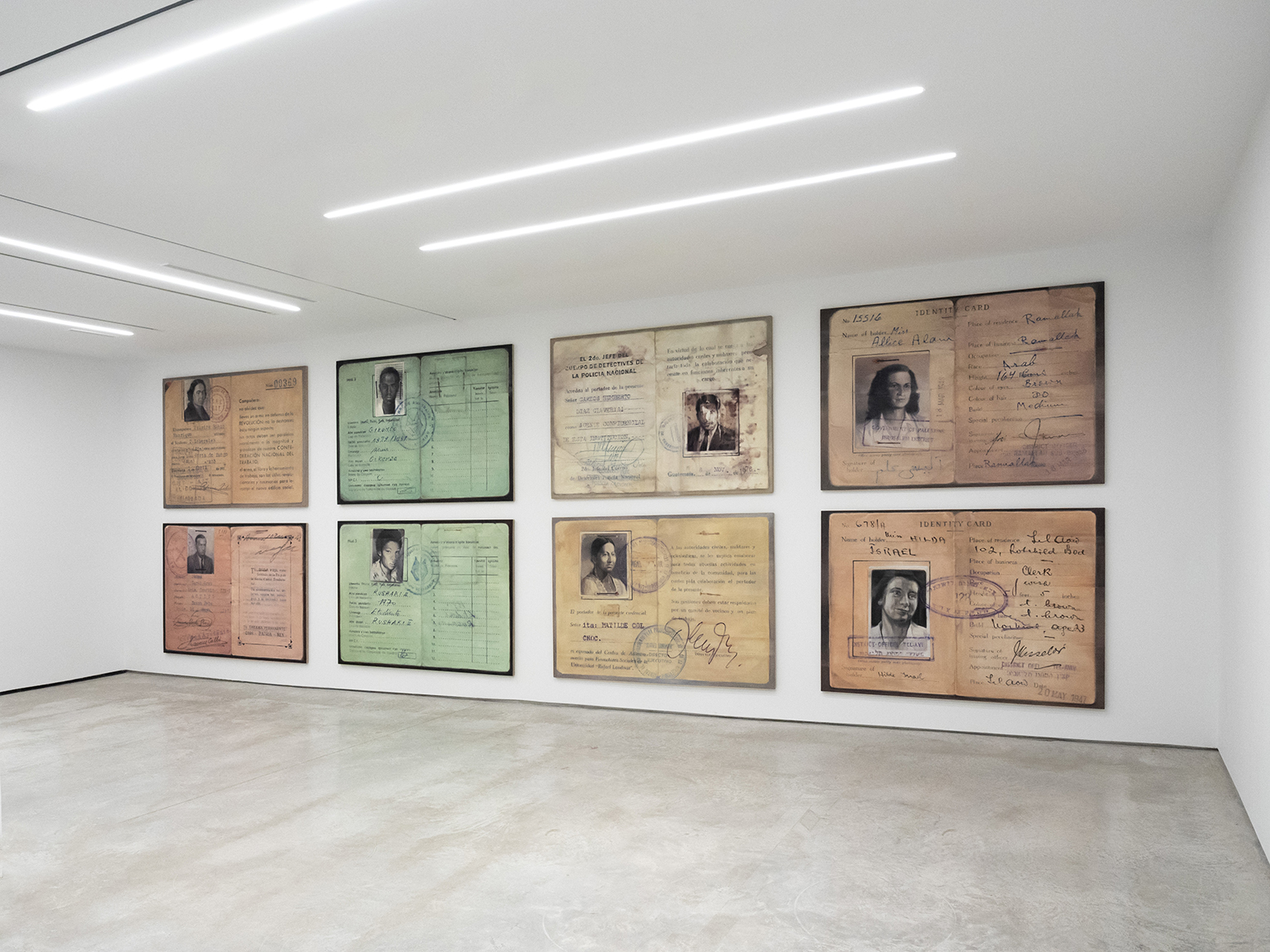 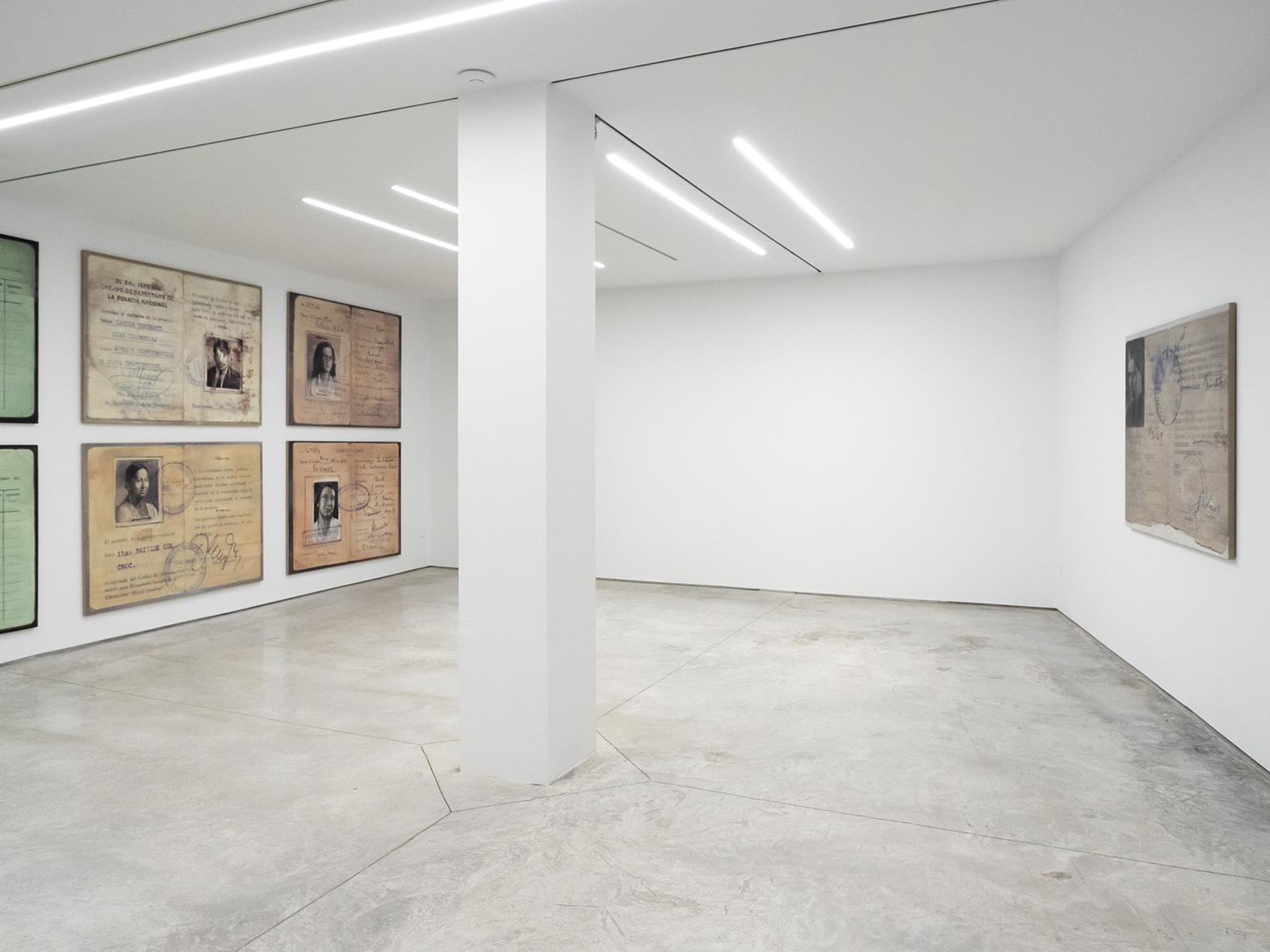 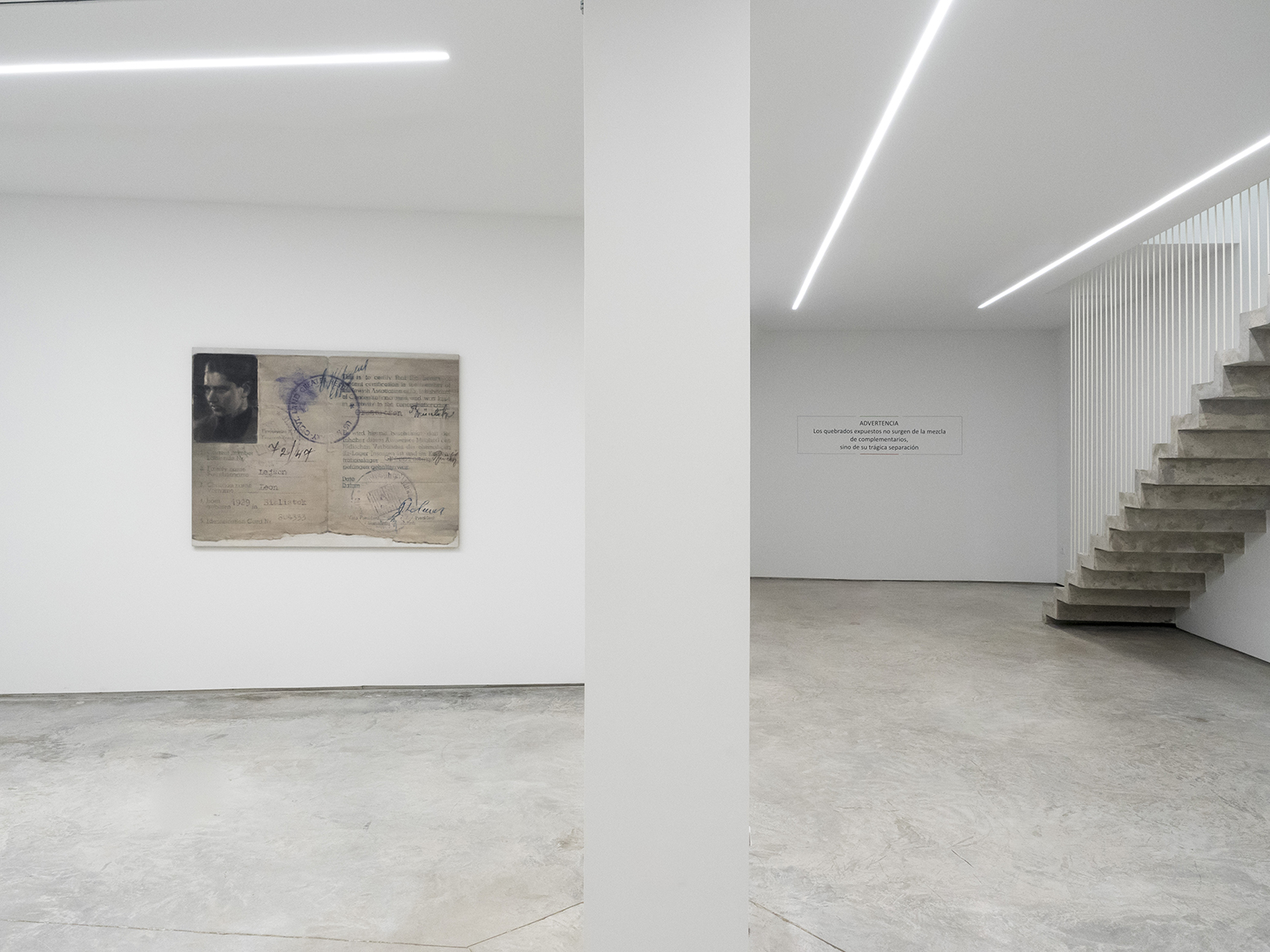 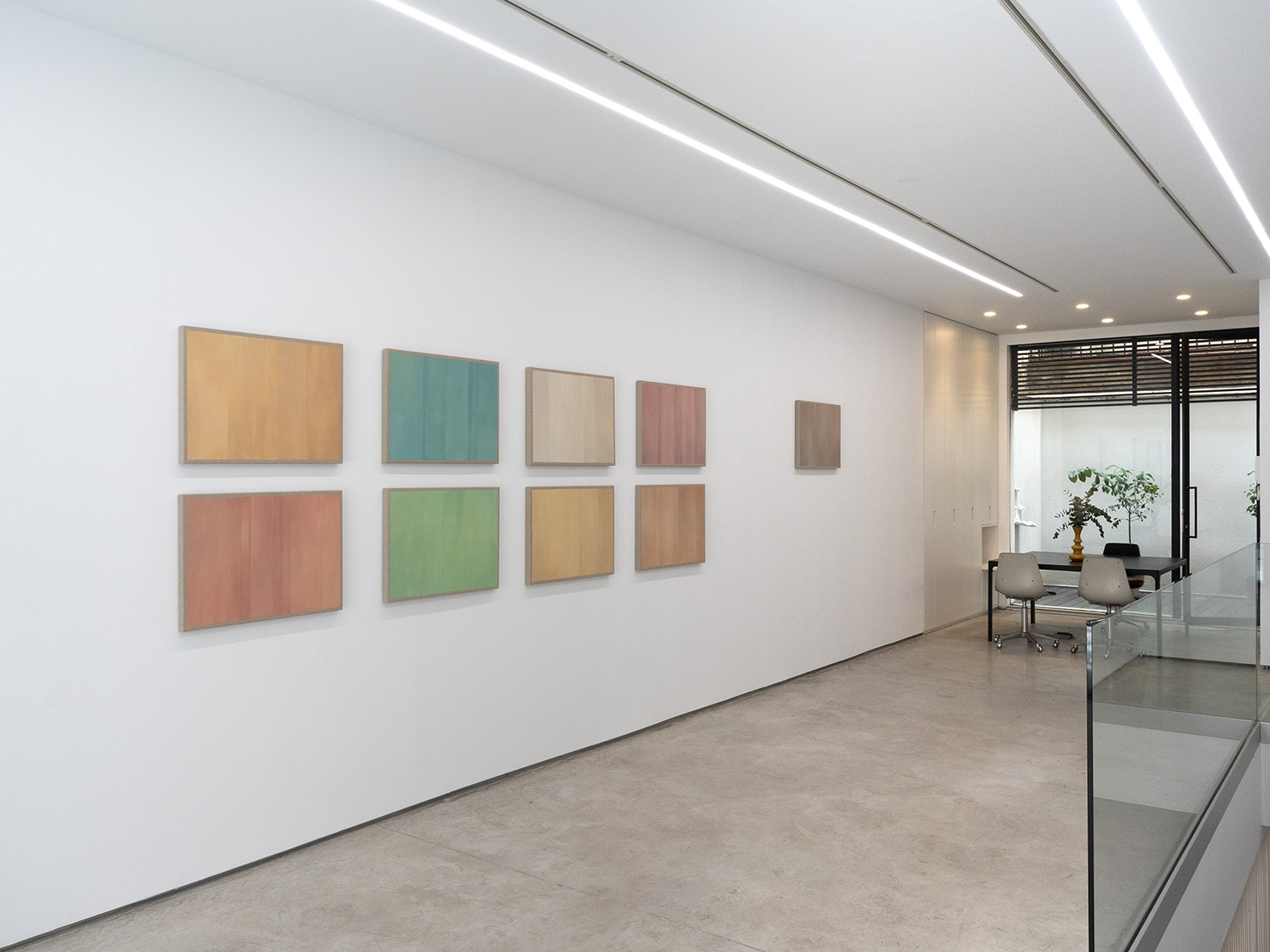