Sometimes we exceed ourselves when we are in the position to explain, to assemble a solid speech justifying the result of what we have before our eyes. Sometimes that justification is by far much more consistent than the end itself. Sometimes we have a perfect conjunction between one and the other or to a breakdown […]

Sometimes we exceed ourselves when we are in the position to explain, to assemble a solid speech justifying the result of what we have before our eyes. Sometimes that justification is by far much more consistent than the end itself. Sometimes we have a perfect conjunction between one and the other or to a breakdown that would have been most successful to ignore. What really matter swhen the process does not concern us? Is the process the cure of all evil or the justification on how to improve what is supported?

From the rhomb to the hexagon there are two lines. It is not an exhibition about the experience, but about the result. We assembled a series of works whose solution is found in the geometrical place, without the process going along the same sceneries, and in the geometric we find an eternal comeback. In the same way there is a return to painting, there is a return also to geometry and beyond an unquestionable loyalty to the means. Artists as Rodríguez-Méndez or Carlos Maciá come to this point in a way that it is not premeditated. One by means of materializing the word of the poet Helberto Helder, while the other by means of tackling a formal problem.

Plasticity and abstraction are to be redounding in the formalization as an end of a process. Ana H. del Amo parts from small schemes to investigate attempts of shapes and shades. In the same way that Kiko Peréz is in the straight, vertical or horizontal lines. In a similar maner in which Andrea Canepa does her drawing, as well as the semi hidden architecture of Juan López. Xavier Arenós mixes narration and pure geometry as a formal outcome of a historical consequence. It is curious how this work, together with that of Diego Santomé, form a resolution of straight lines and minimal and austere forms. Drawings made up of lines, circles, cones and hexagon strokes.

Konstantinos Kavafis referred to Ítaca in his defence.  Getting there is your destination. The possibility of finding this poor destination, setting on the experience is the destination in itself. What leads us to make this journey if the end does not offer us the satisfaction beforehand? Would we perhaps confront the trip even knowing that the ending cannot cause us anything but a deep disappointment? Is it easier to maintain the illusion when the outcome is favourable? What other reason would lurk into the abyss, as did the sailors that Ernest Shackleton recruited? Wanted, men for dangerous journey. Base salary. Long months of complete darkness. Constant danger. The return with life is not assured. Honour and recognition in case of success. Had they climbed on the boat without that last sentence? Would this exhibition in reality be another? 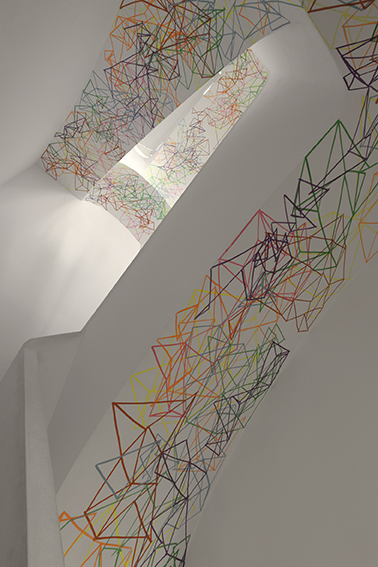